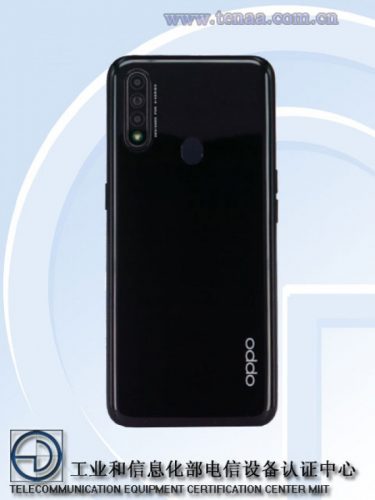 The year is about to end but leaks for the upcoming smartphones don’t seem to end. Now a new Oppo device has been spotted on TENAA that rocks the trendy triple camera design, notch display, and a larger form factor.

Though the smartphone is expected to launch next year, the device has a common design we see in most of the budget and mid-range smartphones these days.

It is said to come with a 6.5-inch water-drop notch display with a 19:9 aspect ratio. The resolution is not yet confirmed but we expect it to be an FHD+ panel. There are three cameras at the rear and a single front-facing camera.

The smartphone is expected to come with a budget-midrange SoC and will house a bigger 4,230mAh battery. It is also speculated to come with some sort of fast charging support.

Oppo’s ColorOS will be running on the smartphone-based on Android 10 out of the box. There will also be rear-mounted fingerprint scanner and Face unlock as a security option.

That’s what we know so far about the upcoming unknown Oppo smartphone but more details should be out soon. Once the latest news arrives, we’ll be the first one to update you.

Also Read: Samsung Galaxy A51 And Galaxy A71 With L-shaped Camera Module And Hole-punch Display Unveiled

Stay Tuned for more updates on the upcoming Oppo smartphone and also Subscribe to Our YouTube Channel Gadget Gig For Latest News, Reviews, Unboxing and Tips/Tricks.