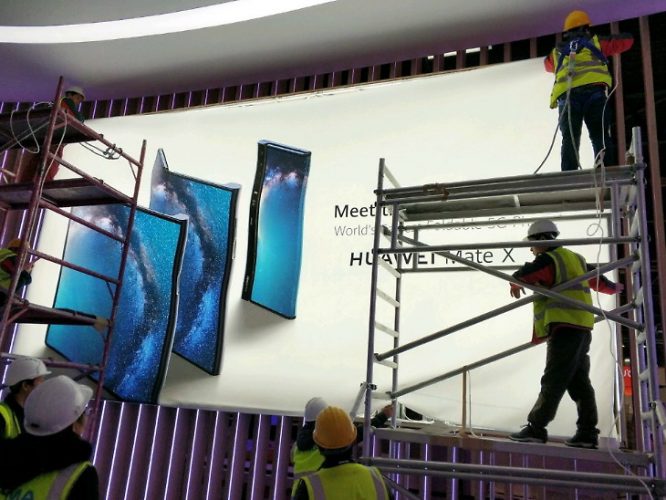 Just after the launch of the Samsung Galaxy Fold, now a leak from one of its competitor, Huawei has been leaked showcasing the foldable device. Some speculations in the past suggested that Huawei will be unveiling their foldable smartphone soon but the exact date and details were unknown. The new leak shares the actual banner of the Huawei Mate X foldable phone which will debut at the MWC 2019 event.

A Twitter user probably related to MWC event shared a photo showcasing the banner of the Huawei Mate X foldable device. The phone is pretty different from the Samsung Galaxy Fold that unveiled a few days back. The Mate X is a one-way folding device just like the Galaxy Fold but has some other changes such as a larger display.

Overall the Huawei Mate X looks pretty great in the banner leak. The banner also states, “World’s First Foldable 5G Phone”, that pretty much says that it will come with 5G support and it will be the first for a foldable phone.

Other than this, there are not many details we can gather and not much has been leaked yet, but Huawei always surprises us with some amazing specifications and feature and we expect to see the same with the Huawei Mate X.

Huawei event will be held on February 24 at 2 pm local time and will be a big event considering that they will be unveiling the world’s first 5G foldable phone. Now let’s just hope Huawei Mate X will be a great device and surely be a competition to the Galaxy Fold.