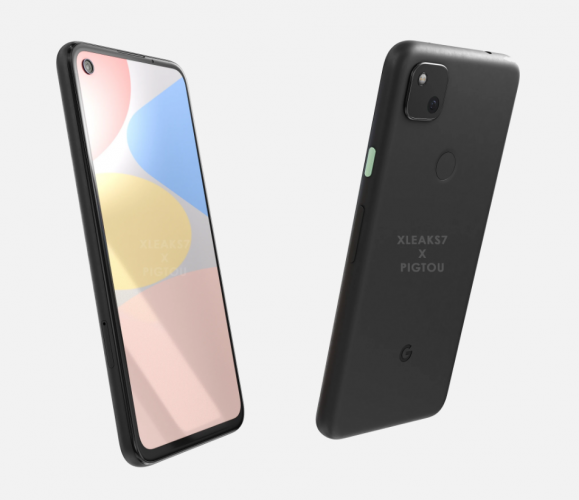 Google Pixel 4a has frequently been popping in the rumor mill, just a day back we saw its camera samples, before that we got its rumored specs, and now its renders have been surfaced online. The upcoming Pixel 4a which will be the Lite variant of the original Pixel 4 looks quite interesting, let’s take a look at the details.

The Google Pixel 4a smartphone’s latest renders showcase the front, rear, and side profiles. Notably, this time Google seems to go all-out and make the Pixel 4a front display an actual full-screen panel. Unlike earlier, this time it has narrow bezels on all four sides.

Earlier, rumors claimed a hole-punch display on the device and these renders confirm it. There is a medium-sized hole for the front camera at the top left of the screen. It will hold a single front camera.

Though the front panel looks good, the rear design is just decent. There is a single rear camera housed in the square-shaped module. There’s also the single-tone LED flash beside the camera lens.

Other than this, we also see the physical fingerprint scanner at back and the Google branding at the bottom center. On the left profile of the device, we get to see the SIM-card tray and on the right profile, there’s the green-colored power button and volume rocker.

That’s what the leak suggests so let’s move to previously leaked specifications. The Google Pixel 4a will come powered by a Qualcomm Snapdragon 730 chipset accompanied with a 6GB of RAM and 64GB of base storage.

It will come with a 5.81-inch OLED panel with an FHD+ resolution. We know that there will be a single-camera setup both at the front and rear but the exact megapixel count is still unknown.

The Pixel 4a will houses a 3,080mAh battery with 18W fast charging support. It will come with a 3.5mm headphone jack and USB Type-C port for charging and data transfer.

The smartphone is expected to launch this month and is tipped to come at a $400/₹30,280 price tag.

Stay Tuned for more updates on Pixel 4a smartphone and also Subscribe to Our YouTube Channel Gadget Gig For Latest News, Reviews, Unboxing, and Tips/Tricks.