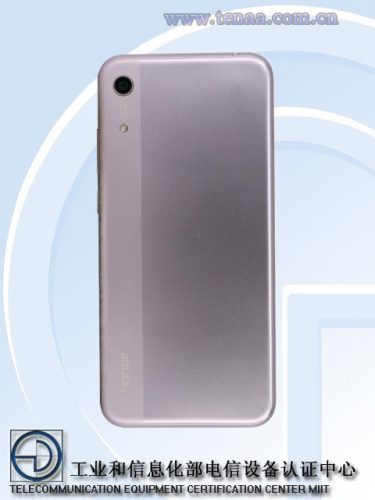 Honor 8A Budget Smartphone With Android 9.0 Pie Spotted On TENAA

A smartphone from Chinese Manufacturer Honor(sub-brand of parent company Huawei) has been surfaced online and the source suggests that it is the upcoming Honor 8A smartphone.

Honor 8A smartphone was spotted on TENAA website showing a couple of images and details. Now, the Honor 8A will be the successor of Honor 7A smartphone and will come with some hardware and design changes. The images from TENAA suggest that the next smartphone from Honor will look similar to the Apple iPhone 6.

Moving to the specifications, it will sport a 6.08-inch HD+(1560X720 pixels) LCD display with a notch on the front top of the display. It will feature a single camera set up at the rear housing a 13-megapixel sensor and will have a LED flash below the camera sensor. On the front, it will sport an 8-megapixel camera.

The device will be powered by a Kirin octa-core chipset clocked at 2.2GHz, however, the exact chipset is unknown to us. It will be paired with 3GB of RAM and is expected to come in 32GB and 64GB onboard storage options.

The Honor 8A will be backed up by a 2920mAh battery but there is no sign of any fast charging support. It will run on Android 9.0 Pie and Huawei’s custom UI on top of it. Looking at the images, the phone seems to skip on fingerprint sensor but is expected to come with Face Unlock as a security. It is expected to come in four colour options, the Red, Blue, Black, and Gold colours.

Other than this, the model numbers of Honor 8A has been suggested previously and they go by JAT-TL00, JAT-AL00 and JAT-L29. Some other leaks also suggest a Pro model of the device namely Honor 8A Pro which is expected to launch with the regular non-pro model.

Stay Tuned for more updates on Honor 8A and also Subscribe to Our YouTube Channel Gadget Gig For Latest News, Reviews, Unboxing and Tips/Tricks.

Honor 8A Honor 8A pricing Honor 8A Pro Honor 8A specifications