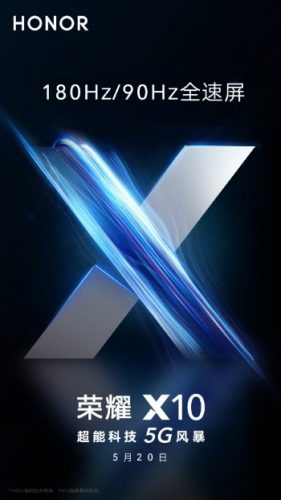 Honor has officially confirmed the launch date of its upcoming mid-range smartphone, the Honor X10, and has also revealed some of its highlights.

The Honor X10 smartphone was in the rumor mill for quite a while now, just a week back we saw some rumors on it specs, just yesterday we saw the smartphone on Tenaa listings, and now the teaser poster confirms that the smartphone will go official on May 20 in China.

The teaser poster confirms that the smartphone will come with a 90Hz refresh rate display with a touch sampling rate of 180Hz. It also reveals that it will be a full-fledged 5G handset.

Other than this, the Tenaa listing of the smartphone suggests that it will come with a massive 6.63-inch FHD+ display. It will be an LCD panel with narrow bezels all around.

It will feature a vertical camera module comprising of a Quad-Camera setup at the rear. It is said to get a Sony IMX 600 series primary camera and will be accompanied by a wide-angle lens.

Under the hood, the smartphone will come powered by the Kirin 820 chipset and is expected to be bundled with 8GB of RAM and up to 256GB of internal storage. It is tipped to house a 4,200mAh battery with 22.5W fast charging support.

Also Read: Nokia 9.3 PureView Flagship Smartphone Will Let You Record 8K Videos at 30FPS; 108MP Sensor and Other Camera Refinements are Coming Too