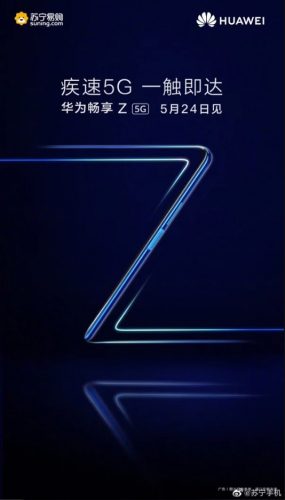 Huawei launched the P40 Lite 5G, Nova 7, and the flagship Mate 30 series with 5G connectivity. Now, the company is all geared up to bring the upcoming Huawei Enjoy Z 5G in China. The company has revealed the launch date and shared a poster teasing some of its details.

It is also confirmed that the smartphone will be a 5G handset and we expect it to be the cheapest 5G offering from Huawei. The poster also shows ‘Z’ by showcasing the side edges of the smartphone that reveals the volume rocker on the smartphone.

That’s what the poster reveals but a previous leak suggested some of its specs. According to the leaks, the Huawei Enjoy Z 5G smartphone is said to power MediaTek Dimensity 800 series chipset. We expect it to arrive with MediaTek Dimensity 820 SoC. It is a 5G chipset that is efficient and is expected to bring a lot of performance boost.

Other than this, the smartphone is also said to come with a massive IPS LCD display and should feature a great set of cameras. It is expected to arrive with a bigger battery and fast charging technology. The Enjoy Z 5G will run on EMUI based on Android 10 out of the box.

The smartphone’s launch is just a week ahead, where we expect to learn more on the smartphone.