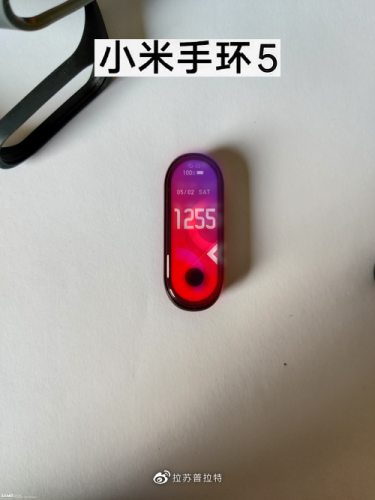 Is This The Xiaomi Mi Band 5? Full-screen Display, Narrow Bezels!

Xiaomi has done pretty well with the Mi Band 4 and it has been a hot-selling fitness wearable ever since the debut, but fans are already excited for Band 5 as it came to the rumor mill earlier. But ever since then, there has been silence and no actual leak of the band has been seen. Well, here’s time time to get excited again, as a leak online shares some hands-on images of the upcoming Mi Band 5.

There were rumors that the upcoming Mi Band 5 would get a bigger screen and more features. The new leak tops it as the alleged first look of the Band 5 shows a bigger full-screen display. It is an AMOLED panel with narrow bezels.

We also get to see a capacitive button at the bottom center. If this is to be believed, we expect it to be the regular action button useful for several actions on the wearable device. This time the overall display is bigger which suggests that more swipe actions are coming to the band.

The images also show the band straps been attached to the gadget. It looks like the older Mi Band 4 band straps can also be used with the Band 5.

Other than this, Band 5 is expected to come with NFC capability even for global variants and should come with some more features along with better battery life.

Currently, we have no data on the other specs and pricing, but we expect to see a new leak in the coming weeks.