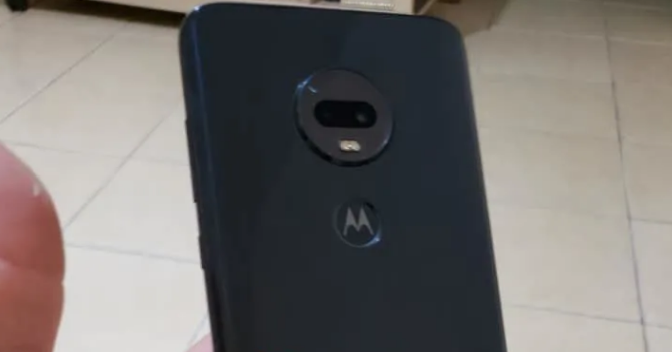 Just a few days left for the launch of Motorola G7 series but the leaks for it are still consistent. Motorola is expected to launch four smartphones in the G7 series namely the Moto G7, Moto G7 Play, Moto G7 Power, and Moto G7 Plus. From these, we know some details of each of the smartphones, but now a new hands-on leak on the Moto G7 Plus has been shared that reveals the device from front and back.

A few weeks back, press renders for all the Moto G7 series smartphones were leaked. But now the hands-on leak for the Plus model shared by @91Mobiles reveals the device for real.

The Moto G7 Plus smartphone looks exactly like the press renders which were leaked earlier. It showcases the front display of the device, sporting a tear-drop notch with minimum bezels all around the phone. However, still, we get to see a thick bottom bezel with Motorola branding on it. Some more front display images also suggests that it will run on Android 9.0 Pie out of the box.

Moving to the back, the device again looks similar to the press renders with the dual camera setup and LED flash at the top middle on the smartphone. Interestingly, this time around Motorola seems to double up their Moto branding as a fingerprint scanner. We also get to see a shinny body at the back that is probably a glass back or a polycarbonate plastic panel.

Other than this, the hands-on leak doesn’t reveal much about the device but from past leaks, we know some of its specifications. So let’s quickly checkout some of it’s leaked specifications.

The Moto G7 Plus will sport a 6.24-inch full-HD+(1080×2270) display with a tear-drop notch. The notch will house the 8-megapixel front camera. The smartphone will come with a 16-megapixel + 5-megapixel rear dual camera setup with a LED flash beneath the camera sensors.

Under the hood, it will sport a Qualcomm Snapdragon 636 SoC clocked at 1.8GHz paired with up to 6GB of RAM and up to 64GB of internal storage. The device will house a 3,000mAh battery and run on Android 9.0 Pie.

In terms of pricing, the pricing for Plus model has not been tipped but it is said that the Moto G7 series will start from $240(Rs. 17,000) and will launch on February 7. If this is the legit pricing in India, then Motorola has to soon pack up overseas only as smartphones from other manufacturers offer much more power at an even lower price than this. Even recently launched Samsung M series offer better value and performance at low prices.

Stay Tuned for more updates on Moto G7 Plus and also Subscribe to Our YouTube Channel Gadget Gig For Latest News, Reviews, Unboxing and Tips/Tricks.