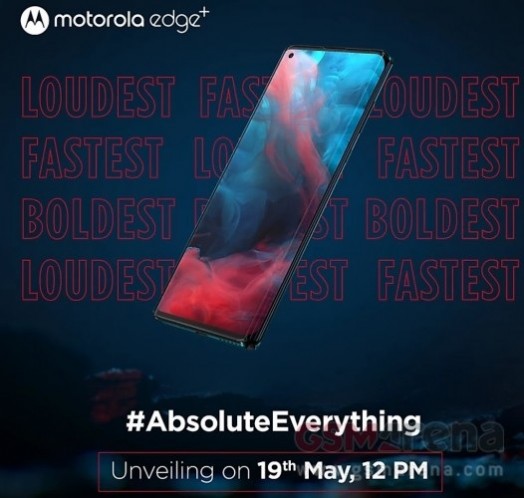 Motorola Edge+ Flagship Smartphone To Launch In India On May 19

Motorola on its social media handle and the Flipkart shopping portal has shared a poster confirming the Indian launch date of the Edge+ smartphone. The Motorola’s  Edge+ smartphone will arrive in India on May 19. The launch is scheduled online at 12PM Indian Standard Time.

There aren’t any details on the vanilla Edge smartphone that came with Snapdragon 765 mid-range SoC. We think that the company will bring it later in the country after looking at the sales of Edge+ smartphone.

The flagship smartphone comes with a massive 6.7-inch AMOLED display. It is an HDR10+ Hole-punch panel with narrow minimum bezels. The smartphone has a 90Hz refresh rate panel with an FHD+ resolution.

It features a whopping 108-megapixel primary camera, another 8-megapixel telephoto lens, and a third 16-megapixel ultra-wide sensor. It also has a ToF sensor above the three lenses.

Under the hood, the smartphone is equipped with Qualcomm Snapdragon 865 chipset bundled with up to 12GB of LPDDR5 RAM and 256GB of UFS 3.0 storage. It has a massive 5,000mAh battery with 18W fast charging support. The device runs on Android 10 out of the box and Motorola has promised 2 years of guaranteed updates on the device.

Also Read: OnePlus 8 and OnePlus 8 Pro Will be Available In The First Sale On May 29 In India

Stay Tuned for more updates on the Motorola’s Edge+ smartphone and also Subscribe to Our YouTube Channel Gadget Gig For Latest News, Reviews, Unboxing, and Tips/Tricks.