Motorola One Vision Press Renders Surfaced: Here Are All The Details

A couple of months back Motorola said that they were working on several Android One smartphones, one of the phones, the Motorola One Vision was leaked earlier. Now again, the smartphone is in the limelight as it renders have surfaced online. 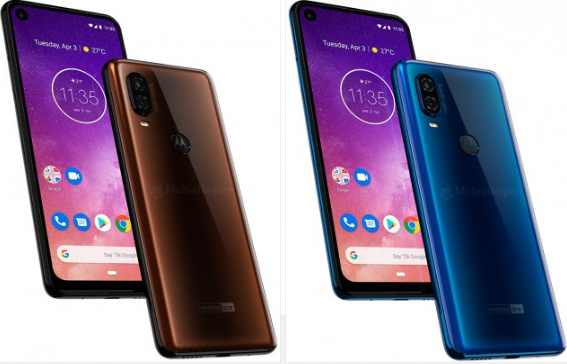 The Motorola One Vision is the company’s upcoming offering as well as the company’s first smartphone with a punch-hole display. The renders reveal that it will come with a beautiful 6.2-inch full-HD+ display without any sort of bezels. Instead of a typical notch, Motorola will be adding a punch-hole camera at the front.

The renders here are pretty good and the Motorola One Vision looks pretty different from any other Motorola smartphone. It also reveals that the device will come in Blue and Chocolate Brown colour variant.

It is expected to come powered by a Samsung Exynos 9610 chipset paired with up to 4GB of RAM and up to 128GB of internal storage. The device will also come equipped with a 48-megapixel primary sensor at the rear. This is the same Sony sensor which is being used in many smartphones these days, so expect great quality photos.

Stay Tuned for more updates on Motorola One Vision and also Subscribe to Our YouTube Channel Gadget Gig For Latest News, Reviews, Unboxing and Tips/Tricks.