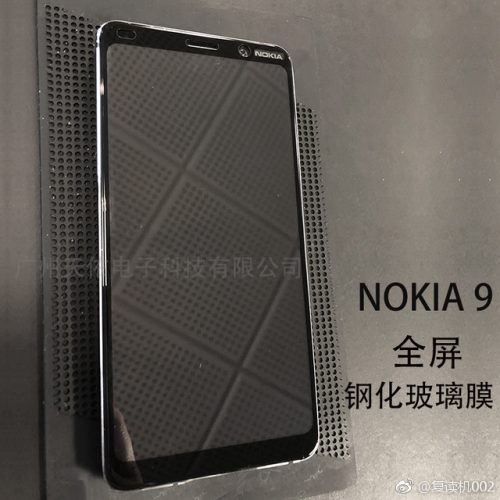 HMD Global’s Nokia has been in the headlines this year as it was rumoured that the company will launch the Nokia 9 smartphone with Penta-lens camera, but sadly only a few days left in 2018 and we still don’t get an official confirmation from the company. But a recent leak suggests the front display of the device and also new rear pictures of the phone have been surfaced, and now we also get to know that it is expected to launch in 2019.

First up a recent picture from SlashLeaks reveals the front panel of the phone. The display of the phone looks to be of a larger ratio, but the phone seems to have thick bezels.

This is nothing interesting as most of the smartphone manufacturers are going bezel-less or at least shrinking the bezels with the help of a notch. Especially in 2019, the phone may seem great from the rear but the front would be a huge disappointment.

Other than this, the leak doesn’t suggest much about theNokia 9 but another leak reveals some details about the back panel of the phone.

In past, we have seen Nokia 9 smartphone’s pictures but those did not confirm much about the actual device and were unfinished. But the new images from a leakster on Instagram are of high quality which he claims to be the actual phone the company will launch.

The image shows the Nokia 9 smartphone’s back and also reveals gradient looking colour variant. The smartphone overall looks to be very stylish and as seen in the past images the Penta-lens camera is present.

The smartphone specifications were earlier tipped and the phone will sport a 5.9-inch FullHD+ display with 18:9 aspect ratio. But as seen the display leak, the phone will have bezels instead of notch.

It will be powered by an Qualcomm Snapdragon 845 SoC paired with 8GB of RAM and 128GB of internal storage. It will also house a 4,150 mAh battery.

Other than this, the Nokia 9 is expected to launch in 2019 but the exact date is not yet confirmed. But some rumours suggest that it will debut at CES 2019, but still we have to wait till the company officially confirms it.