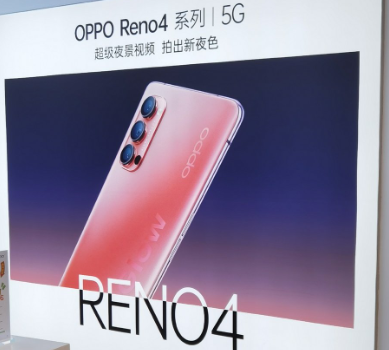 Oppo launched the Reno 3 smartphone last year in China, now just after a couple of months, the Oppo Reno 4 smartphone has been spotted online. The leaked images showcase the design and some of its specifications. Let’s take a look.

Some of the images of the smartphone show the promotional posters displayed in some shops in China. The images reveal that the device will feature a Quad-camera setup at the rear. It will be a vertical camera module with an LED flash within the module. The smartphone’s rear looks alluring with the Oppo branding at the rear.

The promotional posters also reveal that the device will get a 65W fast charging support and 5G connectivity. It also suggests that the body of the smartphone will be relatively slim and there will be a power button on the right-hand side. The smartphone will come in sort of a Pink and Sky Blue color variants.

Other than this, the smartphone’s launch date isn’t tipped nor Oppo has responded yet, but looking at the promo images in retails stores, we expect it to debut soon.

Stay Tuned for more updates on the Oppo’s Reno 4 smartphone and also Subscribe to Our YouTube Channel Gadget Gig For Latest News, Reviews, Unboxing, and Tips/Tricks.