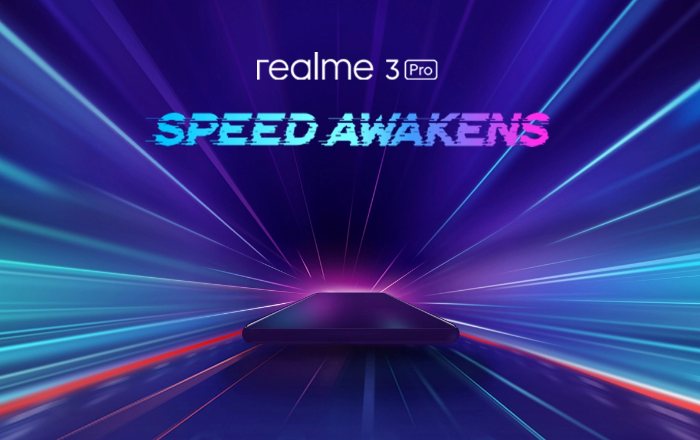 Realme 3 Pro was spotted in several leaks for the past few months, we saw various rumours, teasers, specs leak and now finally the teaser poster has been shared. It reveals some details about the phone and its launch date that is scheduled for April 22 at 12:30 pm in New Delhi, India.

Time to fasten your seat belts as #SpeedAwakens⚡Experience the live unveiling of #realme3Pro from Delhi University at 12:30PM, 22nd Apr. Excited? RT & spread the word. pic.twitter.com/vW57xa5Li5

The smartphone launch event is in Delhi University Stadium which is mainly done to target the youth. To recall, the company did same with the Realme 2 Pro that launched at another university targetting youngsters. Since speed is what the youth loves, the poster states,” Speed Awakens” hinting the updated internals of the phone. Rumours suggested a Qualcomm Snapdragon 710 SoC and if it is legit we might get a worthy competitor to the current crown holder Redmi Note 7 Pro.

How about playing #Fortnite on #realme3Pro? I believe #realme3Pro will be the 1st in its segment that can directly support it. Tried to play this game on some latest "Pro" devices but none of them could manage. When it comes to speed, chipset matters.
RT to win 1 Rm3pro. pic.twitter.com/j5SKOrXA2g

Some of the leaked specifications of the Realme 3 Pro are also interesting and looks like that it will compete head to head to the Redmi Note 7 Pro smartphone. The phone is rumoured to sport a larger display and bezel-less design. It is expected to come in three variants, 4GB RAM, 6GB RAM and even 8GB RAM variant. It is also said to come with a great set of cameras. All of this will be boosted by a massive battery, however, the exact capacity is unknown, but what we know is that the phone will support VOOC fast charging.

Other than this, there is very less information on the phone and we might have to wait till the actual unveiling of the phone on April 22 at Delhi University Stadium.

Also Read: Samsung Galaxy Tab S5e And Galaxy Tab 10.1 To Arrive On April 26 In The US