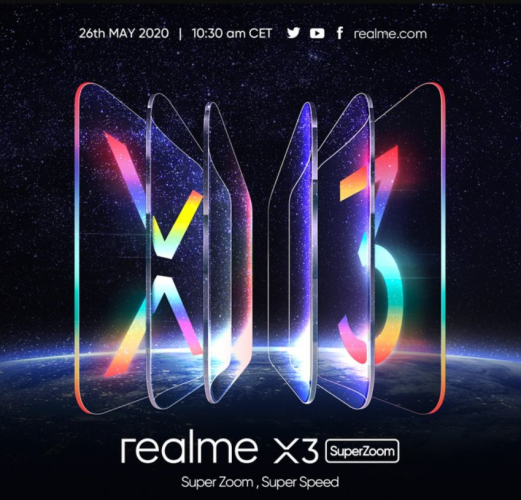 Realme X3 SuperZoom Launch Scheduled For May 26 In Europe; Specs, Pricing, And Availability

Realme has officially scheduled the launch of the Realme X3 SuperZoom smartphone for May 25 in China, but the global launch date was a question. Now, the company on its social media handle has shared a teaser poster that reveals the launch date in the European region and also tips some other details of the device.

The Realme X3 SuperZoom is arriving just a day after the China launch i.e. on May 26 at 10:30 am European time(2 PM Indian Standard Time). The teaser posted hits the narrow bezel smartphone design. It also tips the highlighting feature of the device that is the special zooming capability.

Moving to the leaked and expected specification of the smartphone. The X3 SuperZoom smartphone will be a mid-range flagship from the company powered by the Qualcomm Snapdragon 855+ SoC paired with up to 12GB of RAM and 256GB of internal storage. It will house a 4,200mAh battery with 20W Dart Flash Charging support that is said to charge the device up to 100% quickly.

It will sport a large 6.6-inch FHD+ display with a 120Hz refresh rate panel. It will be an LCD panel with narrow bezels. About the optics, the smartphone is touted to feature four cameras at the rear.

There will be a 64-megapixel primary camera with f/1.8 aperture lens, an 8-megapixel wide sensor with f/2.3 aperture, third 2-megapixel macro lens, and the fourth and the major sensor will be a Zoom lens. It will be an 8-megapixel lens with 60x digital zooming and 5x optical zooming capability. At the front, it will sport a dual selfie setup comprising of a 32-megapixel main camera and another lens probably for depth sensing.

Other than this, the smartphone will run on Android 10 out of the box with Realme UI on top of it. It will feature the 3.5mm headphone jack and will have dual-SIM functionality.

The smartphone will come with some fancy finishes and should arrive in the upper mid-range segment competing with popular flagships from OnePlus. It is expected to be soon shipped after the launch.

Also Read: Realme Watch Launch Scheduled For May 25 In India; Here Are The Known Specs And Features