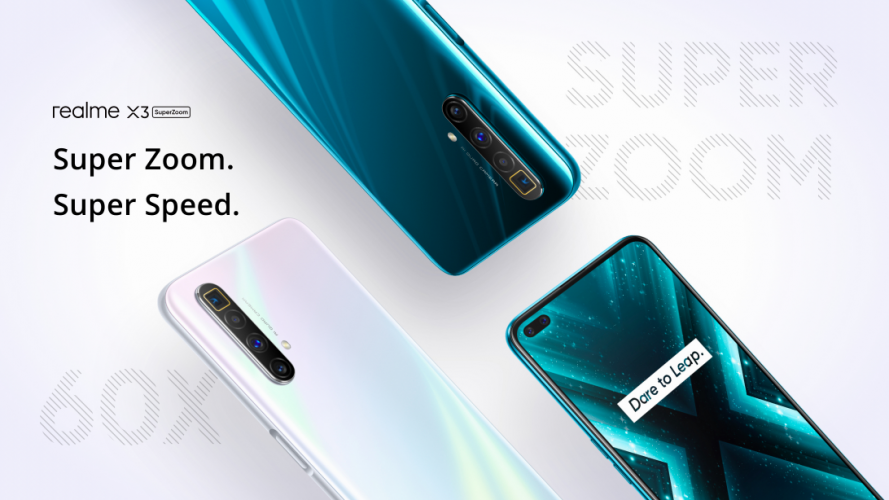 After excessive leaks and teasers, the Realme X3 SuperZoom smartphone has been officially launched. The device is a mid-range flagship from Realme with a year-old SoC to maintain the budget tag while offering a great price to performance ratio. Let’s learn some of its details.

The Realme X3 SuperZoom smartphone’s highlighting feature is evidently the camera and the bonkers zooming functionality. The device bags a Quad-camera setup at the rear with a 64-megapixel Samsung ISOCELL GW1 primary camera.

Moving to the rest of the specs, the smartphone also gets a higher 120Hz refresh rate on the 6.57-inch IPS LCD panel. It is a full-HD+ hole-punch panel with barely any bezels.

Under the hood, the Reame X3 SuperZoom boards last year’s Qualcomm Snapdragon 855+ chipset paired with 12GB of RAM and 256GB of UFS 3.0 internal storage. The houses a 4,200mAh battery with 30W Dart 3.0 fast charging solution. Realme claims the device to get juiced up completely in just 55 minutes of charge.

Other than this, Realme also offers Vapor Chamber cooling to chill out the system while performing heavy tasks. The smartphone features a side-mounted fingerprint scanner and Face unlock as security options. It runs on Android 10 out of the box with Realme UI on top of it.

The device comes in two color variants – the Arctic White and Glacier Blue. It is priced at EUR 499 or roughly $546 for the only 12GB RAM/256GB storage variant. It will go on sale starting today in the European countries via Amazon and Realme’s official website.