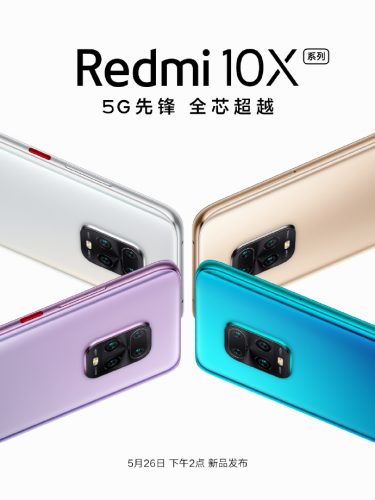 After a rumor spree of the Redmi 10X, the smartphone is finally coming. The company on its Weibo handle has shared the launch date of the smartphone along with some of its specs. Let’s take a look.

Redmi 10X Smartphone Is Arriving On May 10; Expected Specs and Pricing

According to the Weibo post, the Redmi 10x smartphone will debut on May 26 in China. It also reveals that the smartphone will be a budget-friendly 5G handset with the latest MediaTek’s Dimensity 820 chipset.

Just today, MediaTek announced its Dimensity 820 SoC which is an octa-core chipset with Mali G57 GPU. The chipset is powerful and has scored over 4,10,000 on AnTuTu benchmarking platform. This chipset on the 10X smartphone would be a game-changer.

Just like I told you! #Redmi10X 5G in 4 colour options, Blue, White, Violet and Gold! Now waiting for #Redmi10X 4G & #Redmi10XPro 5G. What are your thoughts? #Redmi pic.twitter.com/QXoHCPDnWc

Other than this, the smartphone with model number M2004J7AC was spotted on several certifications which touted its other details. The device is said to come with a 6.57-inch  full-HD+ display with a 20:9 aspect ratio. It will be an OLED panel with narrow bezels.

It will feature a Quad-camera array at the rear and is expected to have a single front camera. It is tipped to house a 4,400mAh battery with some sort of fast charging solution. It will arrive in Gold, Silver, Purple, and Blue finishes and should be priced in the mid-range segment.