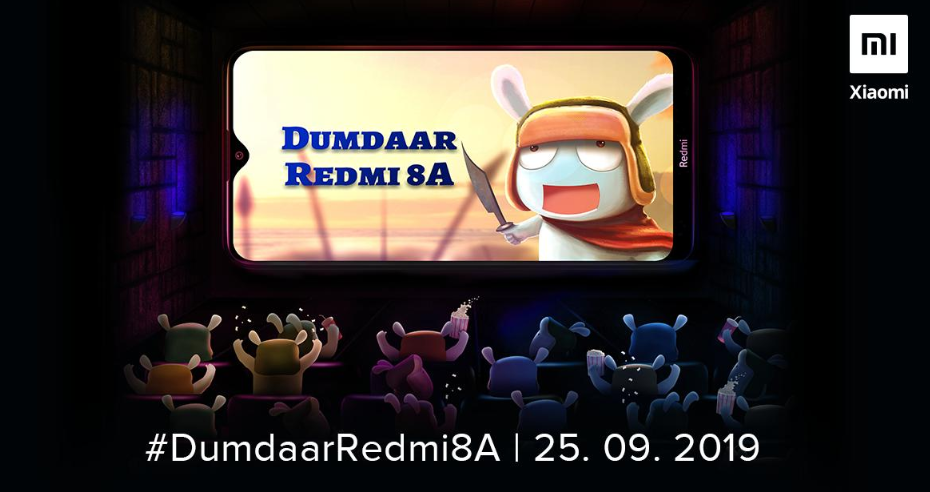 Redmi 8A With Whopping 5,000mAh Battery To Land In India On September 25

Chinese manufacturer Xiaomi launched its Television range and Mi fitness tracker a couple of days back in India. The company is yet to launch its Redmi 8 series in the Indian market, the popular Redmi Note 8 series arrival is a question but the budget smartphone in the A series is coming soon to the country as the company itself has revealed the Redmi 8a launch date in India. The Xiaomi Redmi 8A the successor of Redmi 7A is all set for arrival on September 25 in India.

Time for another dumdaar addition to India's most-loved Redmi A series. We'll unveil the #DumdaarRedmi8A for you on 25th September 2019.
A lot of dumdaar features to look forward to.

Here's one – 5️⃣🔋🔋🔋
Guess it & RT to win this dumdaar phone. pic.twitter.com/mvBeSCMXUt

The upcoming Redmi 8A smartphone was recently teased by Redmi India on its social platforms. The company tweeted with #DumdaarRedmi8A revealing its front design and battery capacity. The company also suggested that it will come with ‘Dumdaar’ features, by this we expect it to be a solid successor of the 7A.

The tweet also revealed that the smartphone will debut with a whopping 5,000mAh battery which is a solid 1,000mAh increase than it’s predecessor’s 4,000mAh battery. Not just this, the company has already made a landing page of the smartphone on Xiaomi India website where it reveals fast charging support, bigger notch display, and the new Aura wave grip design.

Other than this, some specs of mi Redmi 8a were already leaked on TENAA certification. Let’s take a quick look at the details. The Redmi 8A will sport a 6.2-inch HD+ notch display. In terms of cameras, it will feature a single 12MP rear camera and 8MP front camera for selfies. It will house an Octa-core chipset paired with either 2GB, 3GB, or 4GB of RAM and 16GB of base internal memory(expandable via microSD card slot).

The launch of the smartphone is really close but still, we might get some design leaks and some Redmi 8A price leaks in the coming days. Once more details are out we’ll be the first on to notify you on the same.