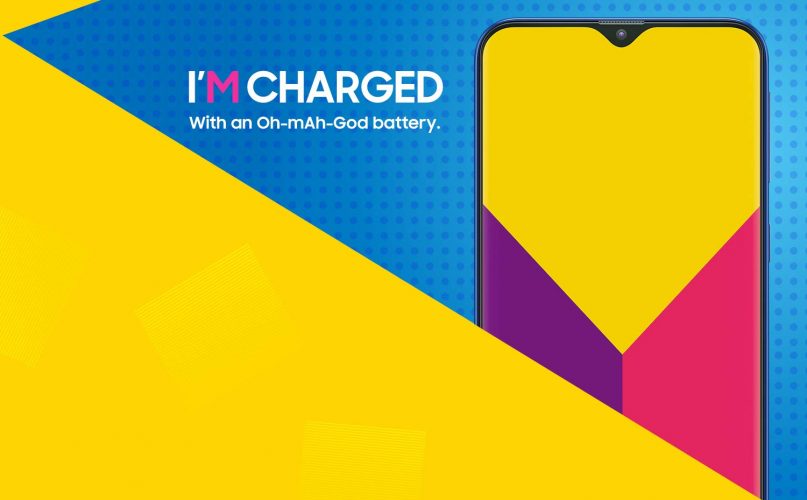 Samsung’s upcoming Galaxy M series was leaked earlier where we got to know that there will be three phone models in this series and all three will sport a full-screen display with a notch making it the company’s first smartphone series with notch displays. Now recent news suggests that Samsung will soon launch the devices in India.

Samsung Galaxy M series teaser poster was spotted on Samsung India website and Amazon India website revealing some of the key specifications of the phones from that series. According to the news earlier, the Galaxy M series will have three phones the Samsung Galaxy M10, Galaxy M20, and Galaxy M30. But Samsung is said to only two models that are the M10 and M20. The company will launch the M30 later.

Now coming to the poster, it reveals that the phones will come with a notch display with very fewer bezels. It also reveals the back panel showing of dual cameras on a phone which could possibly be the Galaxy M10. It will also have a fingerprint scanner at the rear.

Other than this, the teaser poster also reveals that the phones will have a big battery and a powerful chipset. Now as per earlier leaked information, the Samsung Galaxy M series is said to come with massive battery capacity, i.e: 5,000 mAh on the M20 and M30 and 3,400 mAh on the M10.

Most importantly the teaser reveals that the Samsung Galaxy M series phones will launch in India on January 28. This is pretty exciting as the company is said to launch this series, especially in India for competing with Chinese smartphone brands such as Xiaomi, Honor etc.