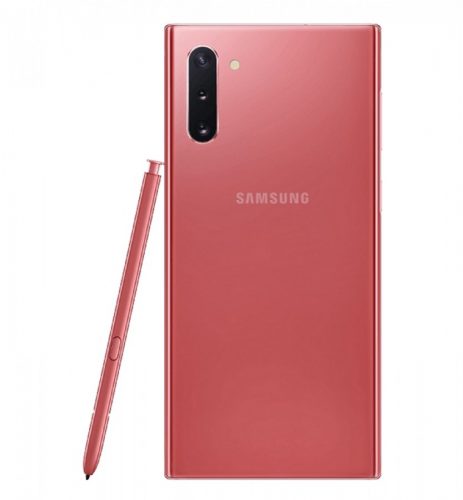 This isn’t new as for the past few weeks the phone has been surfaced multiple times with different color variants. We had speculations for a Blue, White, Pink, Silver, and even the Rose color variant, and now just as we get closer to the launch all the color variants are showing up. Both the Note 10 and Note 10+ will get these color variants, some even speculate a Green color variant to debut in selected regions.

One interesting thing is that the color of S-Pen will remain the same as the smartphone’s finish. This means if the phone’s color is Rose then the S-Pen will also have a Rose color accent. Aside from this, the specs sheet of both the smartphones has already been tipped. Let’s take a look.

The vanilla Galaxy Note 10 will sport a 6.3-inch display whereas the Galaxy Note 10+ will sport a 6.8-inch panel making it a phablet size smartphone. The screen-to-body ratio will also be pretty decent making it look immersive. Both of them with spot triple cameras, but the Note 10+ will get an additional ToF sensor. Under the hood, they will share the same specs, the Snapdragon 855+ or Exynos 9820 chipset.

Other than this, we expect some more leaks incoming until the launch on August 7th.