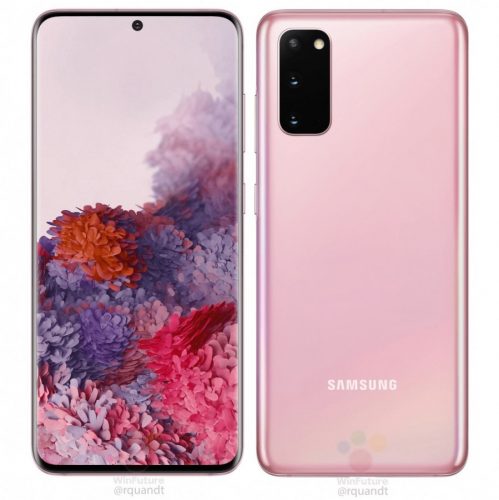 Samsung Galaxy S20 Ultra has been consistent in the rumour mill but its other two siblings, the Galaxy S20 + and Galaxy S20 have been seen less in the news. Now, finally, a leak on the vanilla Galaxy S20 has surfaced online. It reveals the three colour variants of the smartphone and also confirms some specs of the device. Let’s take a look at the details.

If we take a look at the images surfaced online, there’s the Blue colour variant, Cloud Pink variant, and the Cosmic Grey colour variant. It also shows the clean look of the smartphone on both sides.

There are three cameras at the rear housed in the rectangular module which also has the LED flash beside the camera lenses. At the front, we see the rumoured hole-punch display with bare-minimum bezels on all sides. This time the screen-to-body ratio is improved.

Other than this, the flagship smartphone is said to come with Qualcomm Snapdragon 865 SoC paired with 8GB of RAM and 128GB of internal memory. It will also come with a bigger battery and Samsung’s proprietary fast charging solution.

It will run on Android 10 out of the box and Samsung’s One UI 2.0 on top of it. The smartphone is also said to come with a 5G support from all the top carriers offering the service.

That’s what we know so far about the device, but we expect to see more details in the coming weeks. Once, more details are out, we’ll be the first one to notify you of the same.

Stay Tuned for more updates on the Galaxy S20, S20+, and S20 Ultra smartphone and also Subscribe to Our YouTube Channel Gadget Gig For Latest News, Reviews, Unboxing and Tips/Tricks.