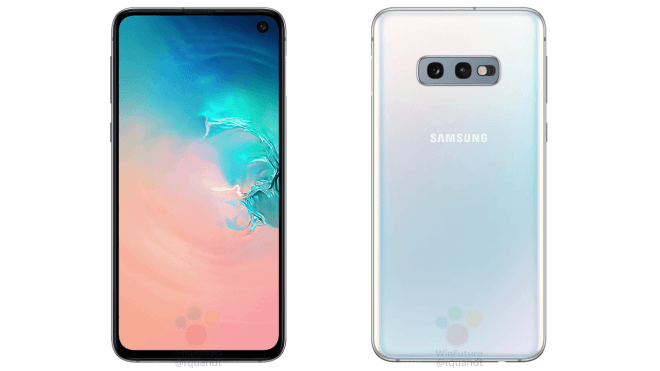 Samsung Galaxy S10 is the most anticipated smartphone right now or at least the leaks are making it more exciting. In the past, we saw a bunch of leaks on the Galaxy S10 and S10+ following with some of their details. Just yesterday we saw the press renders and other pictures of the smartphone. But now interestingly the cheaper Samsung Galaxy S10E or Galaxy S10 Lite leaks have been surfaced online.

Samsung S10 line up has been leaked significant times but there ha been very fewer details about the flat screened Galaxy S10E. The recently leaked press renders of the device gives us a closer look at the profiles of the smartphone.

According to the pictures, the Samsung Galaxy S10E will come with a flat-screen design and will sport a single hole punch camera or the Infinity-O camera display on the front. It will not come with a Samsung’s popular edge display which we’ve been seeing from past few years. We also get to see minimum bezels all around the corner. Now if we move to the rear, the device has a dual camera setup with LED flash beside the camera lens.

This smartphone will be the most affordable Samsung S10 smartphone in the series but still will sport powerful internals. The Samsung Galaxy S10E will be powered by a Qualcomm Snapdragon 855 or the Exynos 9820 depending on the country.

The leaks also point out that the device will sport a 3.5mm headphone jack at the bottom which is will be great to see. It will also come with fingerprint scanner at the right which will double up as a power button.

Other than this, it is said that the device will sport a smaller screen and some tradeoffs here and there. But overall the smartphone looks great and it will probably compete with the Apple’s iPhone XR as both the smartphone sports similiar configurations and comes with same internals as their elder siblings.

Samsung will launch the smartphone on February 20 at the #Unpacked event in San Fransico alongwith the regular Galaxy S10 and S10+ models.