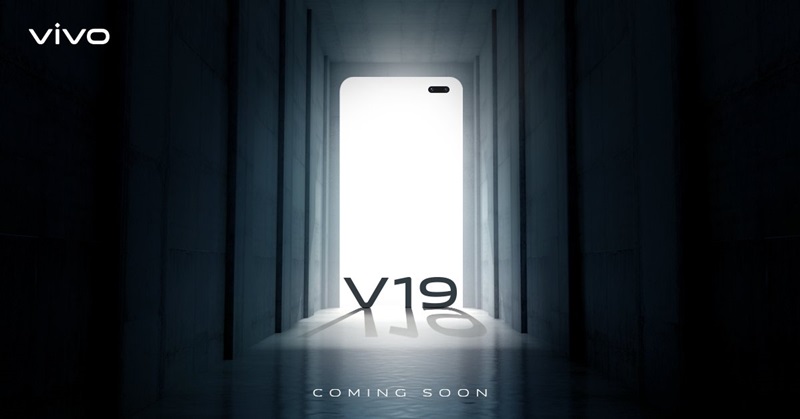 The Vivo V19 smartphone was in the rumor mill for a while and now the company itself has shared the official launch date of the device. There are also few details shared that confirm the already leaked specs. Let’s take a look at the details.

Vivo V19 is the successor of the Vivo V17 smartphone that launched last year. It was said to debut in February this year but there was no word from the company. Now finally, the teaser poster confirms the launch to be on the 26th of March.

The teaser poster also reveals the front design of the smartphone which confirms that it will come with a dual hole-punch display. It is also said to have a bigger and wider display with minimum bezels.

Other than this, the poster does not reveal much.  But some of its details were surfaced in the last couple of weeks. Let’s take a look.

Specs We Know So Far

The Vivo V19 smartphone will be a mid-range device housing a Qualcomm Snapdragon chipset. It will feature a Quad camera setup at the rear consisting of a 48-megapixel primary camera. It will be accompanied by another 8-megapixel lens and two 2-megapixel sensors probably for depth sensing and macro shots.

It will also sport an in-display fingerprint scanner and face unlock as security options. It will be backed up by a 4,500mAh battery with a 33W fast charging solution.

The device’s color variants were also known, it will come in two finishes – the Mystic Silver and Piano Black. In terms of pricing, the device is expected to come in the range of between ₹20,000 to ₹30,000.