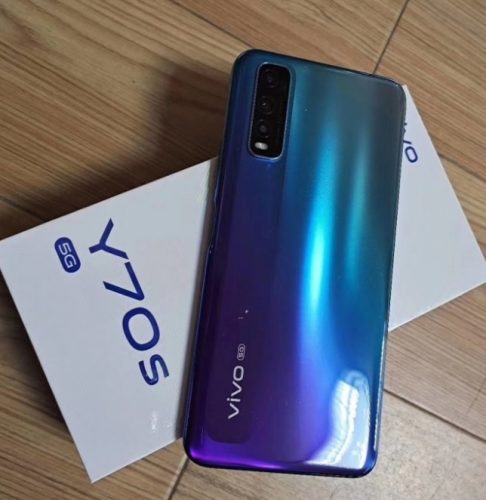 Vivo has been launching several mid-range smartphones lately and the great thing is all the devices are 5G capable making them future proof. Just like that, Vivo is launching another mid-range smartphone, the Vivo Y70s and the company is teasing it on Chinese social media site Weibo. The shared posters of the smartphone reveal some of its specs and details. Let’s take a look.

The upcoming Vivo 5G smartphone, the Y70s was leaked a couple of times in the past. Now, the posters confirm the design, camera details, and color variants.

According to the teaser poster, the Vivo Y70s 5G smartphone will come with a 48-megapixel primary camera at the rear. The picture reveals three cameras at the back which means the other two lenses would probably be a wide-angle lens, and depth or macro sensor.

The poster showcases the front design of the smartphone that confirms a hole-punch panel with narrow bezels. The screen would probably be an LCD panel with a 20:9 aspect ratio.

It also reveals that the mid-ranger will come powered by Samsung’s Exynos 880 chipset with 8GB of RAM and 128GB of internal storage. It will also be backed up by a 4,500mAh battery. The smartphone will run on Android 10 out of the box with Vivo’s FuntouchOS on top of it. It is expected to feature the fingerprint scanner on the sides along with a software-based face unlock as a security option.

Moreover, some leaked live images of the device revealed the gradient color variant. There will be two color options – a sort of Pink radiant and a Blue gradient.

Other than this, the mid-range smartphone’s exact launch date isn’t outed, but looking at the leaks, the launch seems imminent.

Stay Tuned for more updates on the Y70s smartphone and also Subscribe to Our YouTube Channel Gadget Gig For Latest News, Reviews, Unboxing, and Tips/Tricks.