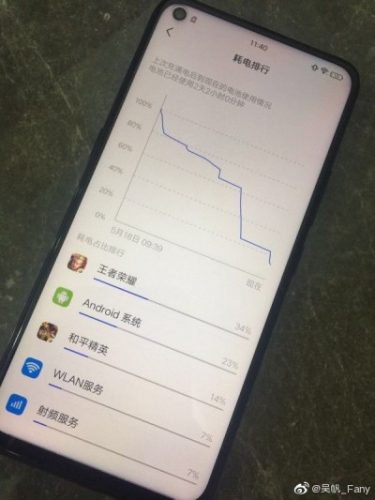 A few days ago we got some details of the upcoming Vivo Z5x smartphone including its render images. Now we have got a first look at the live image of the smartphone.

The Vivo Z5x smartphone looks similar to the render that leaked a few days ago. It sports a massive 6.53-inch display with a hole punch camera. This time Vivo is going with the new hole punch trend for its upcoming smartphone. Even though it doesn’t sport a notch, it still has some amount bezels on top and bottom.

In the past, the phone was tipped to come with a 5,000mAh battery that we expected to last for more than a day. Well, now we can see the smartphone’s screen-on-time and it impresses us. The device has 13% juice left even after a 14-hour gaming session. This means the smartphone offers a complete two-day battery life.

That good battery life is due to the newer generation chipset. Though the internals is yet to be known, we expect it will come powered by either a Snapdragon 670 or Snapdragon 675 SoC.

Other than this, the smartphone will run on Android 9 Pie and Vivo’s custom Funtouch 9 OS on top of it. The smartphone is also expected to come with a great set of cameras as most of the mid-range smartphones from the company pair a decent camera.

Also Read: Redmi K20 Smartphone With Flagship Specs To Launch On May 28 In China