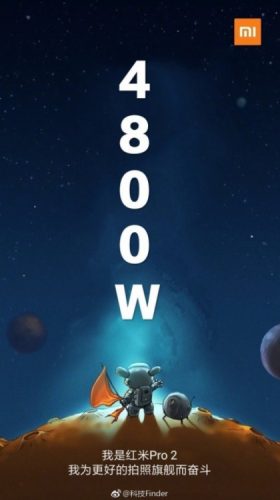 Xiaomi’s upcoming Redmi Pro 2 smartphone has been in the news for quite-a-while and all the leaks made it the most anticipated smartphone from Xiaomi. Now, recent news confirms the smartphones launch date and also hints on some important details.

The past leaks on Xiaomi smartphones suggested Redmi 7 series of smartphones but the phone 3C listing and other surfaced information do not suggest a 48-megapixel smartphone in the Redmi 7 series. This further confirms that this will be the Xiaomi Redmi Pro 2 smartphone.

Other than this, the shadow below the ‘Redmi’ text hints the number ‘ 48’ which is a clear confirmation that a Redmi phone with a 48-megapixel camera will be launched at the event on January 2. The event is being held in Bejing, China at 2 PM(China time).

The company has also started the registration of this phone on their Xiaomi China Website. But there are no clues on the global launch of the device.