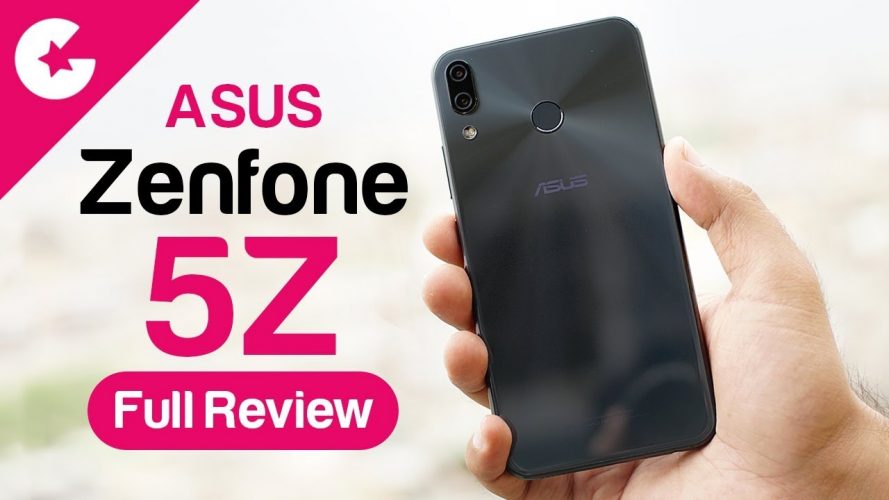 Qualcomm Snapdragon 845, 6GB RAM, 90% Body to screen Ratio and priced under 30000 Rs. Looks tempting isn’t it. Here we are are talking about this new flagship phone from Asus the Zenfone 5Z Which is the cheapest Phone available at this point with the Snapdragon 845 processor.

Zenfone 5Z is not as curvy as the onePlus 6 but when you hold the device the phone feels premium and that is mainly due to the Metal frame and the Glass back. The phone also feel really well built with high quality material. Comparing it with the OnePlus 6, Zenfone 5Z is lighter and weighs Just 155 Grams. So overall in terms of build quality i really like the phone.Talking about the Design the Phone has a notch in the front which is quiet prominent and With this Zenfone 5Z offers 90% Screen to Body ratio. One thing which i personally not able to understand these days that at one place we have this notch on the top to give you this all screen front experience and on the other hand we have this thick Chin at the bottom which doesn’t make any sense.

In terms of other design features This phone has glass back where we see this shiny patterns spreading out from the fingerprint sensor, which looks cool in my opinion. Than we have the dual camera setup on the top left along with the Dual tone LED flash. If you closely there is also a slight camera bump which doesn’t bother me that much.

We have the 6.2 Inch FHD+ Display, and during our testing i found the display of the phone sharp and this could be one of the best display i have seen in this price segment. It has the 19:9 aspect ratio IPS Display which offers 90% screen to body ratio. colours look vibrant and the viewing angles are also pretty good. We have the notch at the the top of the display which is wider than OnePlus 6 and some other phones. But luckily you have the option to hide the notch in the display settings.

Overall i like the display performance but the only place where i feel this display lacks is the brightness during direct sunlight.

As we have mentioned earlier that the Zenfone 5Z is the cheapest smartphone that comes with the Snapdragon 845 processor. Its the Qualcomm’s flagship processor so it will be really difficult to find any problem with it. When we tested the phone we found the phone performs buttery smooth and thanks to the 6GB RAM there was no issue in the overall performance. The phone is smooth and lag free while performing different tasks. We also played the popular Game PUBG on the phone and at the High Graphics setting there was no stutter and frame drops. The gaming experience on this phone is  very good which as expected from this hardware.

We also did the benchmark test and in the Antutu benchmark we got a good score over 260000 every time and that is with the AI Boost on which bumped up the the Performance of the phone. Apart from the hardware performance the Sound quality of the speakers was also very good. The dual speaker setup offers good experience while watching videos and playing games. The Earphones which we got with the phone are also of decent quality and nothing to complaint about there.

The Phones comes with the Android Oreo 8.0 out of the box with the ZEN UI. Software of the phone is well optimised and with the flagship hardware this works even better. The phone also comes with Lot of AI Features such AI Charging which learn your battery charging habit and adjust the charging speed based on your charging pattern. For eg. If you leave the phone plugged in at the night, the phone will not be using the quick charging and It will charge it upto 80 percent and than pause the charging. And than it it will start the trickle charging and charge your phone to 100% based on your usual time to unplug the phone. Apart from that we have the AI Ringtone which sense the surrounding noise level and set the ringtone volume accordingly.

There are also other AI features present on the phone such as AI Boost which gives you that extra boost in the performance and is very useful specially playing games and than we have the AI Scene detection. The camera of the phone detects certain objects and scenes and setup the camera accordingly i will talk about that in moment. Apart from the AI features there are other Asus features such as fingerprint gestures and zen motions. Where you can double tap on the screen to turn off and wake up the screen. And other things like Alphabet Gestures to launch any app in dark.

The phone also has the Zenmoji which is something similar to Animojis. And this might be my personal preference but i never find them useful and i find the Zenmoji on the phone needs lot of improvements. While gaming we also noticed that there is Game Genie feature which is something very similar to what we have seen in the Samsung phones. It lets you record game play and you can also do a live stream on YouTube in Full HD from your phone. Overall in terms of software ZENUI works good and apart from minor stutter and lag we have no issues in the performance. There were few software glitches here and there such as i got this while using Instagram and the half of the screen disappeared. But these are just minor issues and rarely happens and can be easily rectified with future software updates.

Zenfone 5Z comes with the dual rear camera setup at the back where the primary camera is 12 MP with an aperture of f1.8 and the 8 mp secondary camera with f/2.0 aperture. The primary camera has the SONY IMX363 sensor and its the same sensor which is in the Mi Mix 2s. Day Light performance is good, though the output of the photos are little bit on the saturated side.

The HDR Photos does look very good and you also have the AUTO HDR Option. With the OIS there were hardly any blurry shots. Indoor the performance was also decent but sometimes while taking macro shots we noticed the colours are either off or the photo is over exposed or under exposed. But the focus lock on the phone is fast and you will not face any issue in focusing smaller objects. In the night time the phone performance is like any other phone in this price segment but with the AI improvements you get better overall output. Portrait mode in the phone looks great and the edge detection is also very good and the edge detentions works on objects very good.

One more feature is that you have the Wide Angle Camera option which Asus claimed that it will let you capture wider shots. And it does what it claims and helps you capture wider angle shoots. In the front we have the 8 mp camera with an aperture f2.0 The camera angle is wide and offers 84 degree filed of view. Day light shots came out pretty decent and looks good.  Colours are accurate here and with natural skin tone. But in the low light the performance is average. We also have the Portrait mode in the front camera which shoots those depth effect selfies very good but sometimes it wasn’t able to detect the edges properly.

Zenfone 5Z comes with the 3300 mAh battery. And for testing we started our day with 100% charge and we used the phone for clicking few Photos and videos , watching videos on youtube, playing PUBG for an hour or so, checking social media every now and than and other few other daily tasks. With this usage we were left with around 20 % battery at the end of the day. Which is not very impressive but again standard in this price segment.

The phone also supports  quick charge 3.0 and with the bundled 18W adapter the phone can reach 0-100% charge in around one and half hours and you can get upto 60% in just 40-45 minutes.

We have the Fingerprint sensor at the back. Which by the way works really good and recognised the finger print very fast. The position of the fingerprint sensor is right which makes it more convenient to unlock the phone. There is also a face unlock feature which works well most of the time and as experienced on other phones it doesn’t work well in low light.

So to sum it up. Asus Zenfone 5Z is priced at Rs. 30000 for the 6GB RAM and the 64 GB storage variant. The first thing is the pricing and i can say that the company has done an amazing job keeping the price low and that too with the flagship Snapdragon 845 processor. And right now you are also getting 3000 Rs off on Flipkart as special offer. And at that price this phone is value for money and We recommend this phone if you are looking to buy a good phone under 30000 Rs Specially if you upgrading from a Budget segment phone and now wants to get your hands on a phone which looks and works like a flagship but without leaving a hole in your pocket. The Overall performance of the Zenfone 5Z is good and with all the AI enhancements where some of them are really useful and offers better user experience.

The camera performance is also good during day time and you get a decent performance during night time or low light. Comparing it with the OnePlus 6 the camera performance of the Zenfone 5z is almost there but not as good as Pixel phones and Samsung Galaxy S9. You are getting few things extra in this phone as compare to the OnePlus 6 such as dual stereo speaker, microSD card expansion slot  and wide angle camera and that too in Rs 5000  less than the OnePlus 6. But this doesn’t mean that there no cons in this phone. You are not getting wireless charging or water resistant and there are few software glitches here and there. But as an overall package Asus Zenfone 5Z is the affordable Flagship phone and is one of the best phone you can buy in this price range.