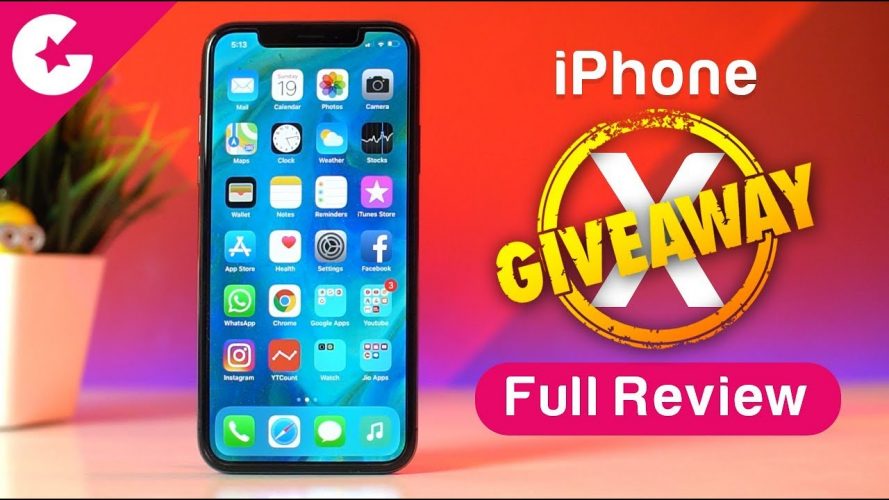 iPhone X Full Review : Is it Really worth Buying ?? (Giveaway)

Hello Everyone this is Anuj from Gadget Gig. With the launch of iPhone 8 and 8 plus apple also announced the iPhone X and after using it for almost two weeks  we will see if this phone has what it takes to be the world’s best smart phone.Before we start let me tell you we are giving away this iPhone X so do checkout our YouTube Video fore more details on how to win this phone.

iPhone X is my daily driver for more than two weeks and here is what we like and dislike about this most expensive iPhone ever.

So lets start first with things we like about the iPhone X.

Starting with design and the build quality

No doubt the look and feel and the build quality of the iPhone x is the best till now among the previous iPhones we have seen and used. In terms of design It surely has some inspiration from the previous versions like the shape which looks very similar to the iPhone 3G and the glass front and back which apple has used earlier in the iPhone 4.

iPhone X comes in 2 colours silver and the space grey. And design wise we really

like how it looks and fits in your palm easily. Also the back of the iPhone X is much more cleaner and now we have a vertical camera for better AR support for which we will talk about later in this video and we

just have the iPhone written and all the other regulatory text is removed giving the phone a cleaner look.

There is no home button and the controls are gesture base due to which which we have now a bigger all screen front and to be honest it is the biggest attraction about this phone. we have a 5.8 inch OLED display which is first in an iPhone designed by apple and manufactured by Samsung.

The 5.8 inch 18:9 OLED display is even though bigger than the 5.5 inch display of the iPhone 8 plus but the phone is smaller than the iPhone 8 plus and slightly bigger than the iPhone 8.  In my opinion the display of the iPhone x is stunning and with the bezel less 2017 design and the curved edges on the phone makes this phone really beautiful.
The quality of the display is amazing and the colours are as good as compare to  the displays we have seen on the Samsung phones. With OLED display there is always a risk of the screen burn or the ghost image which we have seen in the pixel devices. But apple says that they have taken steps to prevent this in there specially designed OLED displays.

And of-course we have the notch on the top which makes this phone unique and its very prominent. And some calls it ugly and some people calls it as an obstruction but with the passage of time it kind of blend in and you wont feel the presence of it.There are problems with app being not optimised but we started to see the updates rolling out on most of the apps to be able to go full screen rather than software bezel on the top and bottom.

Due to the absence of the home button the control is all gesture base. And surprisingly they work flawlessly and once you start using them there is no going back. There was a time when after using the iPhone X for few days and i started swiping up on the other phones. In simple words the implementation of the gesture control is really good in the iPhone X.

iPhone X comes with the latest A11 bionic chip which is a Hexa core processor, three core GPU, 3 GB Ram and the storage option of 64 an 256 gb. The iPhone x pretty much share the hardware with the iPhone 8 and 8 plus apart from the true depth camera which is used for Face id and Animoji.

Talking about the Face ID as there is no touch id on the phone. It recognise the 3D image of yours and can’t be fooled with picture of yours. Setting up the face id is simple and straightforward. As far as the functionality goes face id works almost all the time and even in the room with no light.

There were instances where the face id feels slow and you will have to try it few times to unlock the screen. Still keeping in mind that its the first generation of the face id and we hope will improve it with software and hardware updates in the future iPhones.

True depth camera is also used for the Animoji and as seen on the keynote you can send those funny Animoji to your friends. Other might find it useful but to be honest i didn’t use this feature that much expect in the beginning to test it out.

The iPhone X has the dual 12 mp rear camera setup and placed vertically for better AR experience. We have done an AR gaming video so check this video fore more details :- https://youtu.be/ohWQYkoAA7k

The Photos looks amazing and the output is very good.

Overall the colour reproduction is excellent and with 4k 60fps video output its one of the best iPhone camera we have ever tested.

The front camera also support portrait mode which is still in beta and needs improvement. The performance of the front camera in Day light is good but the camera struggles in the low light.

As apple claims that you will be getting 2 hour extra battery backup as compare to the iPhone 7. And during our testing we found that with moderate use we were able to get a complete day backup with around 15% battery left and with the usage of around 6 hours. Which is not bad in my opinion but could be better.

First is its damn expensive. This is the first iPhone which crossed the $1000 mark or Rs 1 lac in India and getting one is really difficult at the moment  and also the wait time is around 1 month and if you want to get one right now in India sadly you will have to pay some premium to the retail store.

And in case you drop this phone by mistake and break the back glass than it will cost you fortune to get it repair and not sure it will be readily available in the service centres.

3) No Fast Charger in the Box

Also the the power adapter which we get is standard one and it upset us that even the phone support fast charging apple didn’t include one in the box. And So charging this phone always takes around 3-3:30 hours which is really not acceptable at this time.

iOS 11 is optimised for iPhone x like we have the control centre is now on the top right and all these gestures. But we noticed its getting little laggy some times and when the app is frozen there is no way you can close it or go the home screen as there is no home button. The only option is to force restart the phone.

Apart from that we think that the iPhone X could have an optional touch id on the power button as the face id is not really that secure. We have read some articles where it is fooled by identical twins and a 10 year boy unlocked his moms phone.

iPhone X is damn expensive and if you don’t mind spending money to get this latest and greatest by apple than go for it. But we honestly think that couple of new features like face id and the Animoji there is nothing new to offer and the main focus is on the design and the screen. If you have an iPhone 7 or 8 we would recommend you to stick with it as you have the same iOS 11 and missing out on Animoji and Face ID (we still prefer touch id) is not really a big deal.

Face id needs lot of improvements and we also heard some rumours about the 3 new iPhones next year So those could have better implementation of face id or even touch id may be under the screen. Lets hope for the best.

So what do you think about the iPhone X and do you also agree to the points we have covered in this video.  Do let us know in the comment section below.

And Don’t forget to take part in the Giveaway.

Once Again this is Anuj Signing off. Take Care