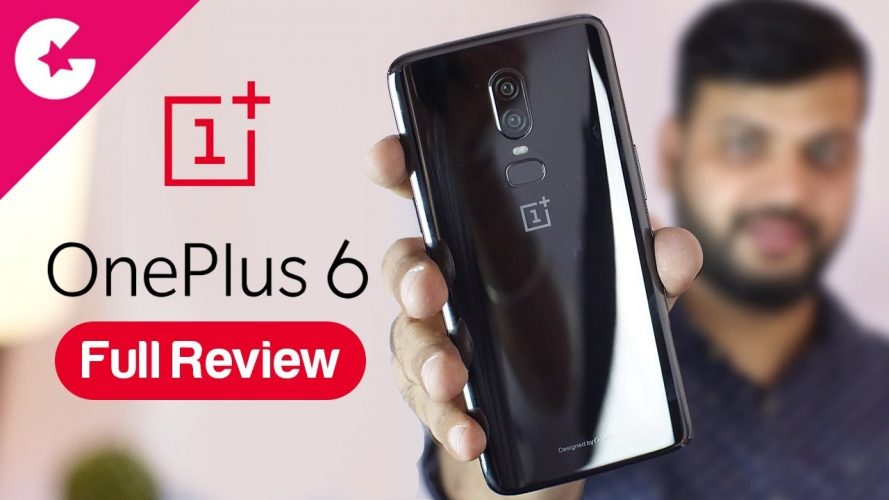 OnePlus launches new phone every 6 months and thy are known for offering great phones with flagship specs at low price. We got the OnePlus 6 from Amazon and its the 8GB RAM and 128GB Storage variant. The price of the phone is 39999 where the 6GB RAM and 64GB Storage is available at 35000 Rs. 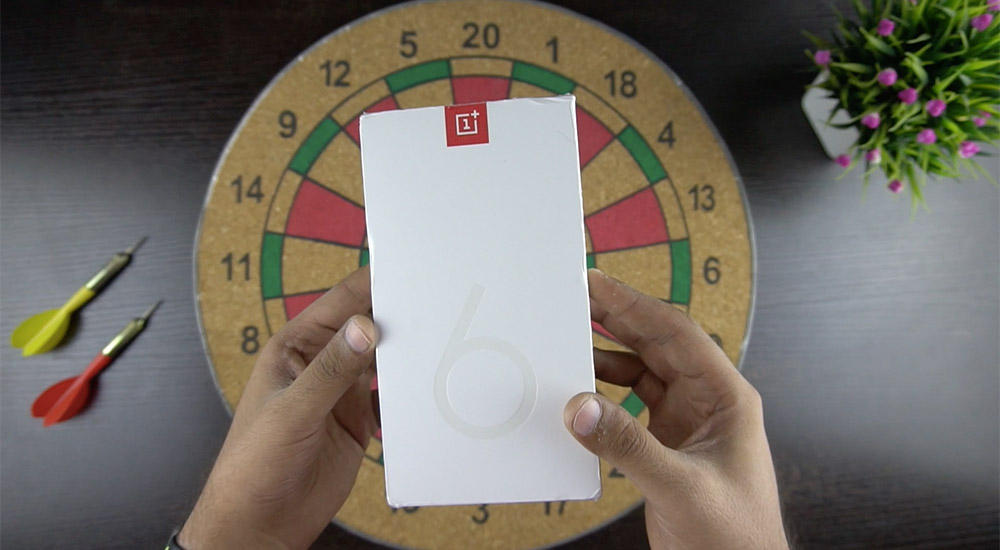 The box has the same old minimal design and we have the number 6 written on it representing the OnePlus 6. And than on the side we have the tag line The Speed you need. 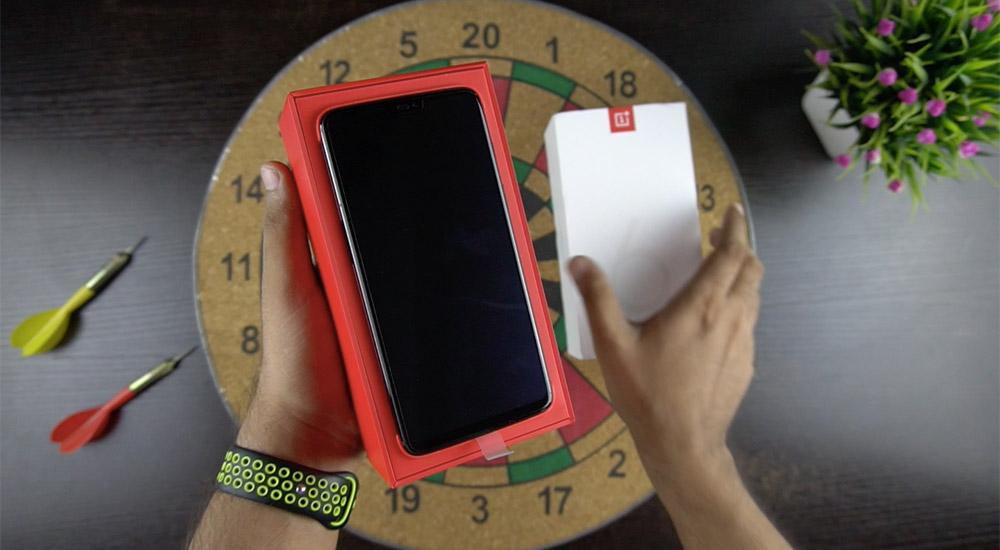 In the box we have headset up on top. Lets keep it aside and see what else we here. WE get the back cover which has the documentation such user guide, safety information and some OnePlus Stickers.

USB C Type charging  cable and The dash charger which we have seen with the previous oneplus phones.

Design and the Build quality

OnePlus 6 has all new design with the notch in the front, Glass Back and the Square Fingerprint sensor at the back. There are three different version available Mirror Black, Midnight Black and the Limited Avenger edition. 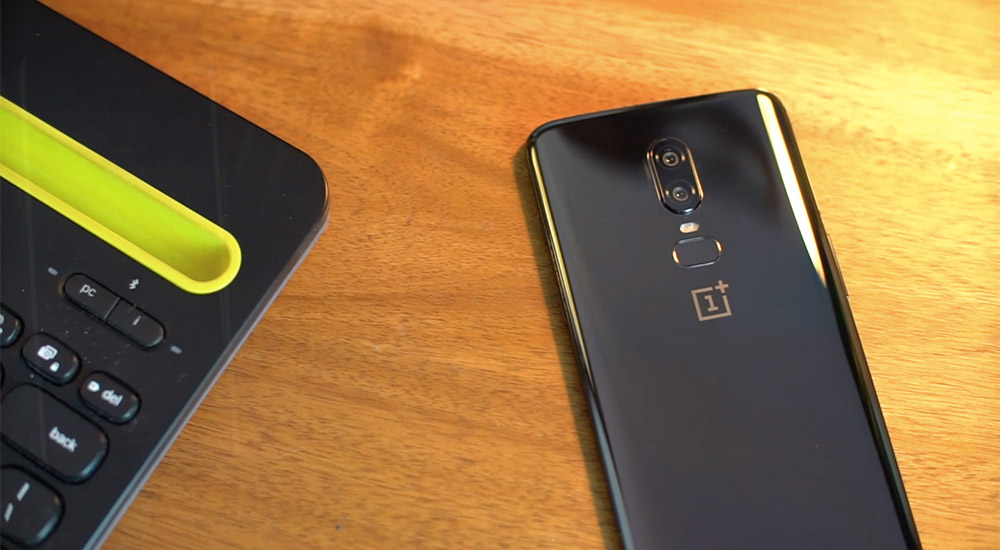 The one we have here is the mirror black 8GB RAM Variant and if you go for the 6GB Variant the Mirror black is the only option.  The glass back as expected is Shiny, Slippery and attract finger prints and smudges as soon as you touch it. SO using it without the cover is not an option here. Though the OnePlus 6 has the Gorilla Glass 5 protection in the front and back which will protect it from minor scratches.

Overall the Design of the OnePlus 6 is premium and as usual it has the excellent build quality and With the curved edges you will feel comfortable holding the phone but because of the slippery glass back you will have to be bit cautious while handling the phone. 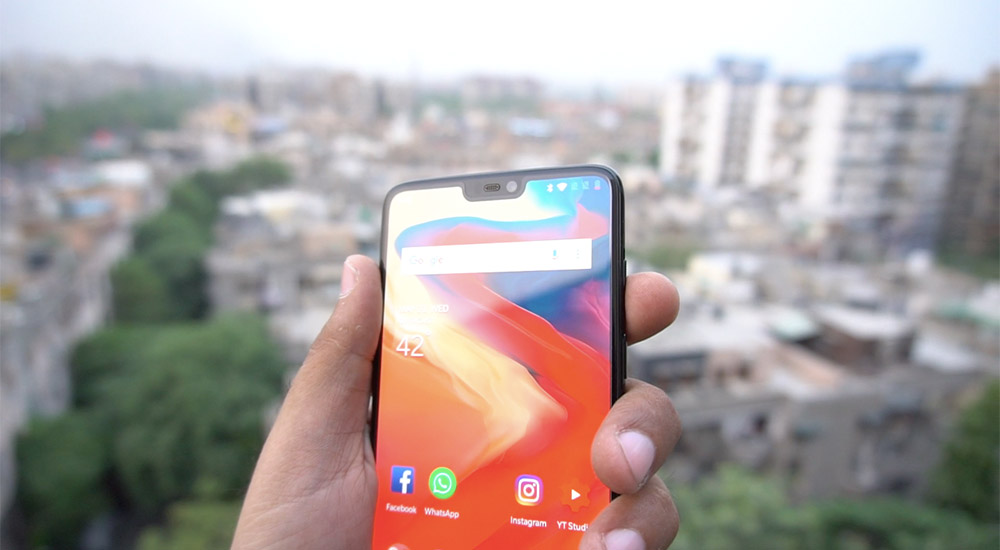 Now the first thing you will notice when you see the phone is the Notch. The size of the notch is smaller as compare to the iPhone X and other phones and it houses the Light and proximity Sensor, Earpiece, front camera and the Notification LED.  And to be honest i don’t mind the notch on the phone but some might see this as a distraction. 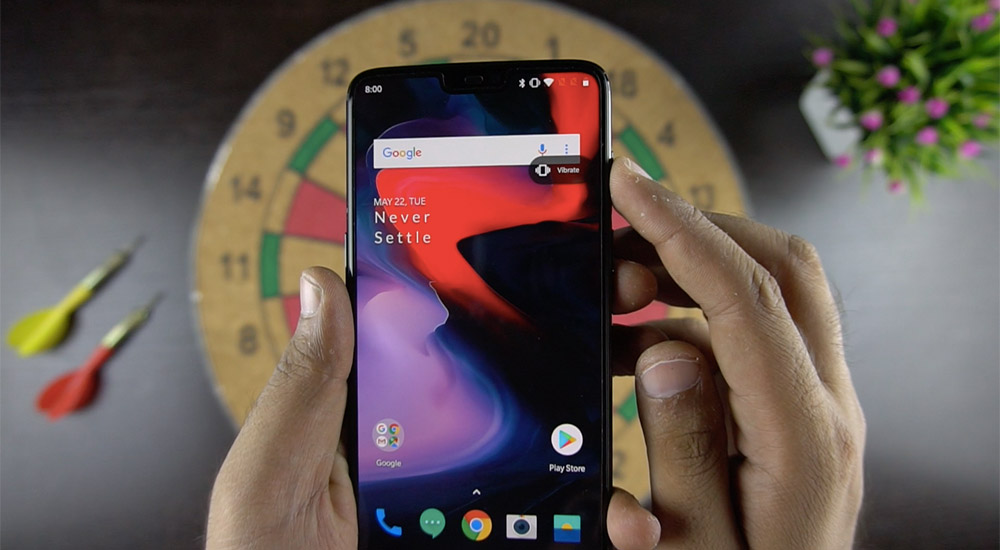 In terms of other design changes the Alert slider is now moved to the right with the option to switch between , silent, vibrate and ringer mode. Its Water resistant but there is no official rating for water and dust protection so you better avoid jumping in the pool with the phone.

we have the 6.28 inch optic AMOLED screen which is the largest we have seen in any OnePlus phone. The screen on the OnePlus 6 has the 19:9 aspect ration and The viewing angles are good as well as the overall colour output. The resolution is FHD+ which is not what we expect from a flagship phone in 2018. 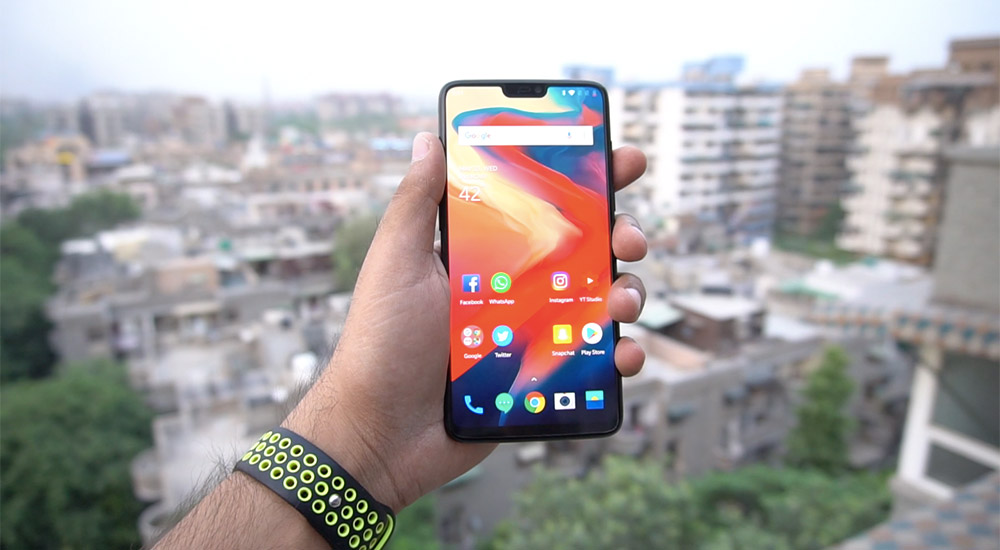 Even-though the screen output is decent but its not as vibrant as the Samsung screens and We wish that it had at least QHD Screen. Missing on the QHD Screen doesn’t make the phone future proof as you won’t be able to get the optimal output if you decided to use it with a VR headset. If VR is something which is not your requirement than the FHD+ will not disappoint you for you daily usage. 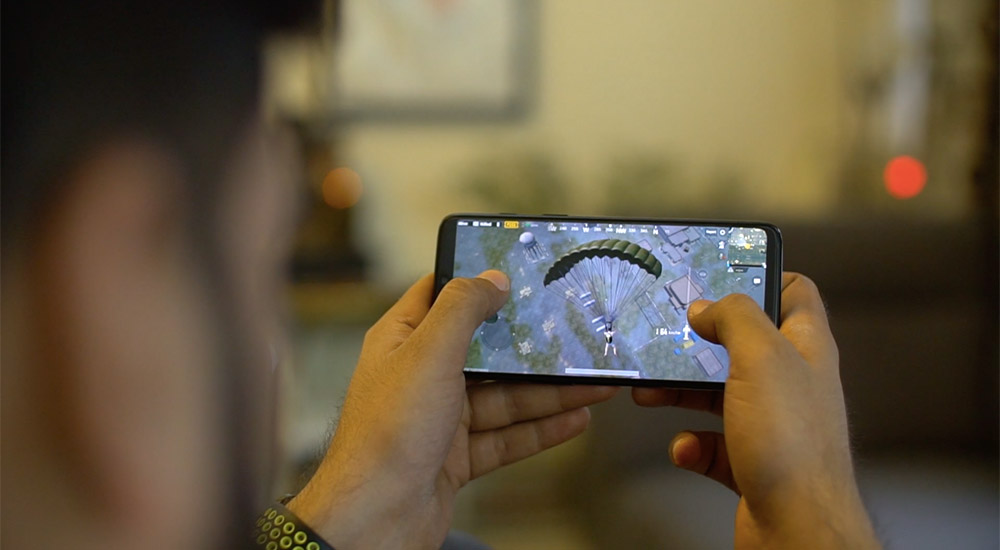 In the Antutu benchmark we go the score close to 250,000 which is what we expected from this hardware. 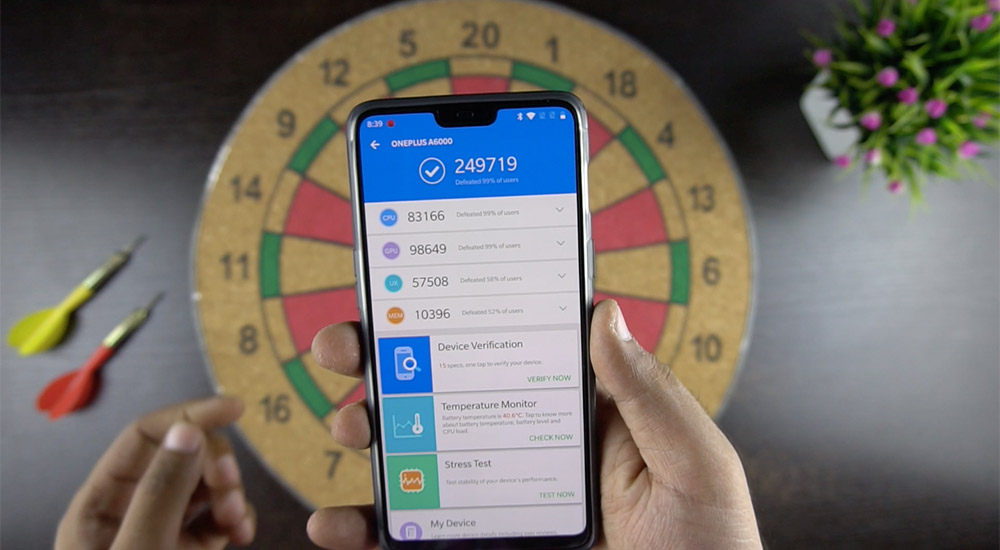 and the similar benchmark results can be seen with  Geenkbench 4. 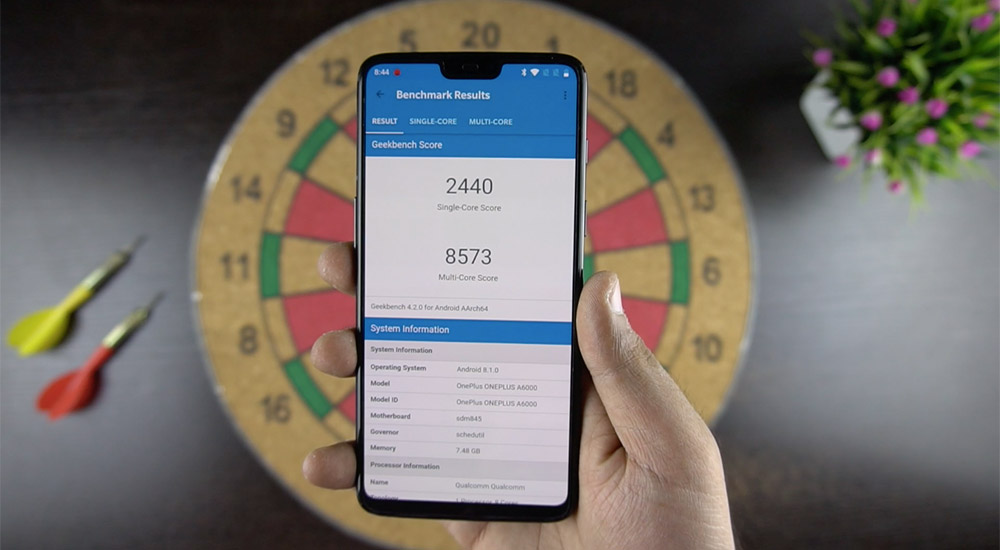 We also played the famous PUBG Game on the phone with all the graphics settings at high and we had not seen any single frame drop or lag while playing the game.

The phone doesn’t’ have heating issues but we felt the phone gets slight warm while playing games for long duration.

The battery is 3300 mAh and thanks to the dash charging we were up to 80% from 46% in just half an hour. And we played PUBG for half an hour and the battery consumption was only 14%. And with the moderate usage we were able to get 1 Day battery backup without any issues. 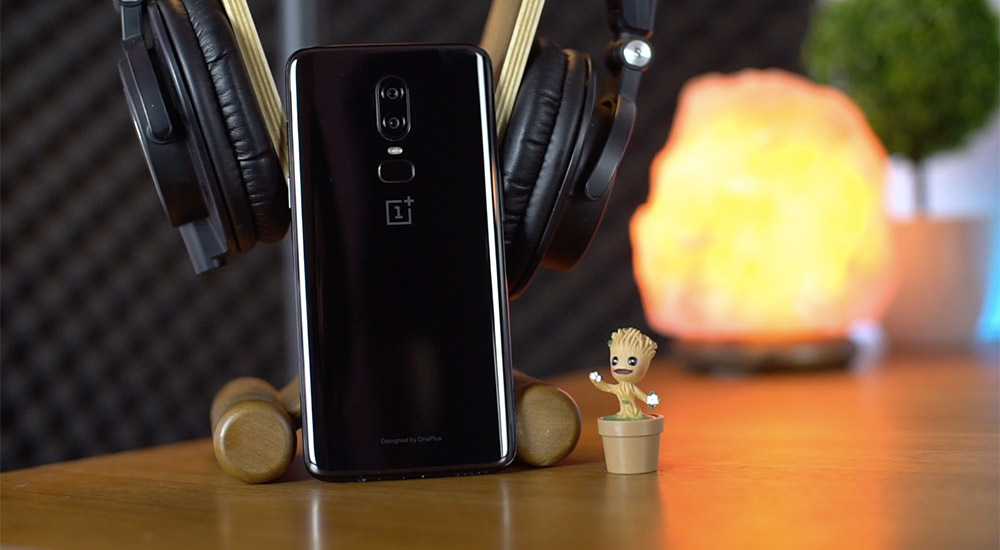 Apart from that the Performance of the OnePlus 6 is amazing and we give it 10 out of 10.

The OS on the OnePlus 6 is is the OxygenOS which is based on the Android Oreo 8.1 and We also got the May security patch update  at the time Reviewing the unit. The OS will give you near to stock experience but with lots of additional features. 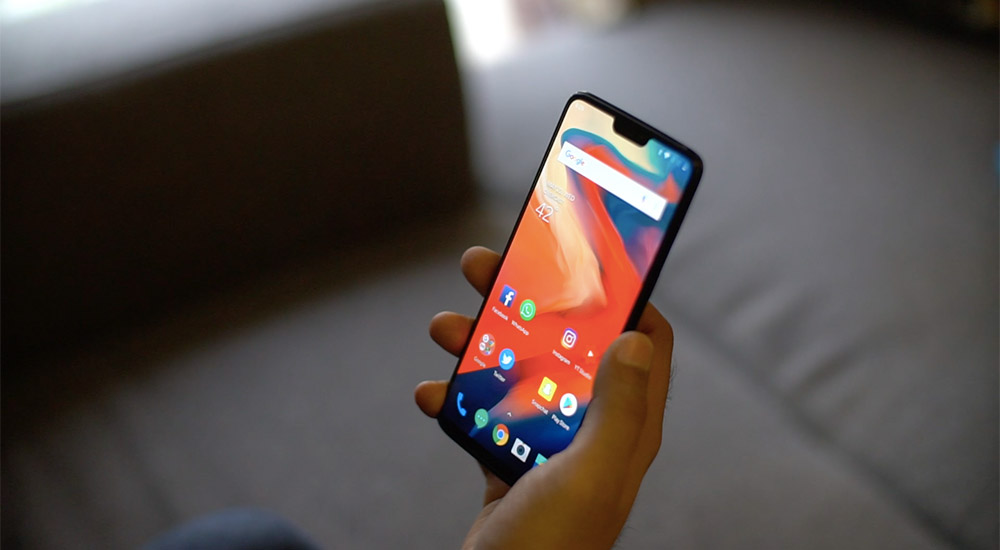 One major feature is the gestures, using the Gestures will remove the on screen buttons and Short swipe from the bottom will open the app drawer and if you continue swiping you will see the app switcher. To go back you just have to swipe up from the side of the screen. Initially its bit confusing but i got used to it and found the gestures pretty useful. 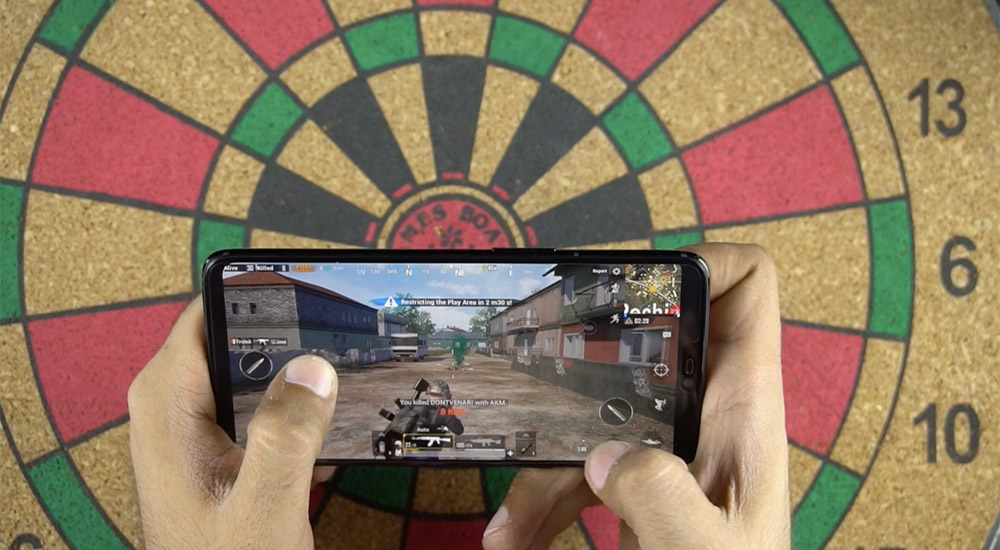 There is also gaming mode which not only limits the notification but also limits the background internet usage for other apps and it also route the calls to speaker of the phone while you are in the gaming mode. 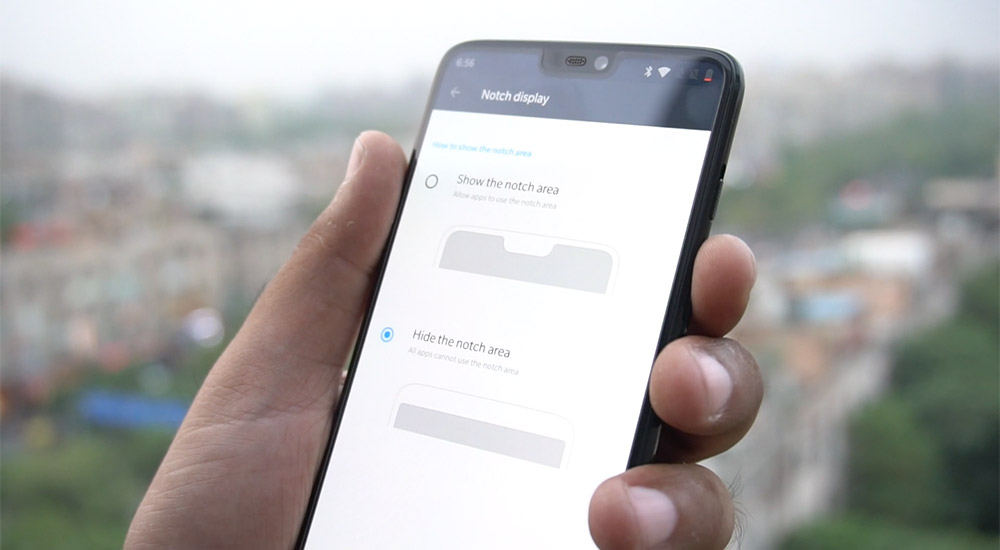 One plus 6 has the notch in the front but in the oxygen os you have the option to hide the notch. It places a black background near the notch area. in my opinion  its A good option if you think the notch is really annoying.Overall the OS performance is very good  its fast, fluid and feature rich and it was pleasant experience using the device with the OxygenOS.

The major change this year is the Optical image stabilisation. the feature is added to the Primary 16 MP Camera. we have the 16Mp and 20 mp rear camera setup with the F1.7 aperture. OnePlus has increased the sensor size on the main 16mp camera by 19% which will help to capture photos in low light.

We have tested the camera in different conditions to start with here are some day shots.

Camera performance is good and most of the photos came out pretty good. The colour output was accurate and the camera is capable of capturing sharp and clear images .We had no issues in focusing smaller objects and the macro shots came out also pretty decent.To be honest i still feel that the performance is great but not as good as the pixel 2. We will also be doing a dedicated camera comparison video between the Pixel 2 vsOnePlus 6 so do subscribe to our channel for more updates.

The low light performance of the OnePlus 6 is good and we were able to capture good shots during low light. In the artificial lighting the output of the rear camera is decent and we didn’t see any noise in the pictures.

And in the night time because of the larger sensor size the output of the photos came out decent with less noise and we were able to capture colours even in very low light condition.

The portrait mode output is also came out pretty good and we like the overall   output of the OnePlus 6. The edge detection of the one plus 6 is accurate and you will get the smooth and natural bokeh effect. 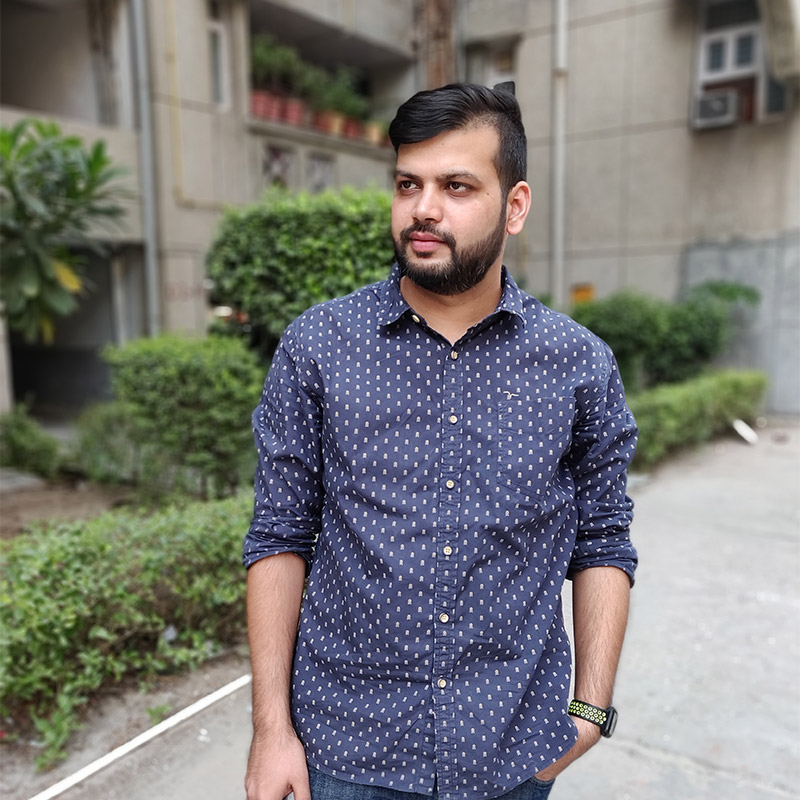 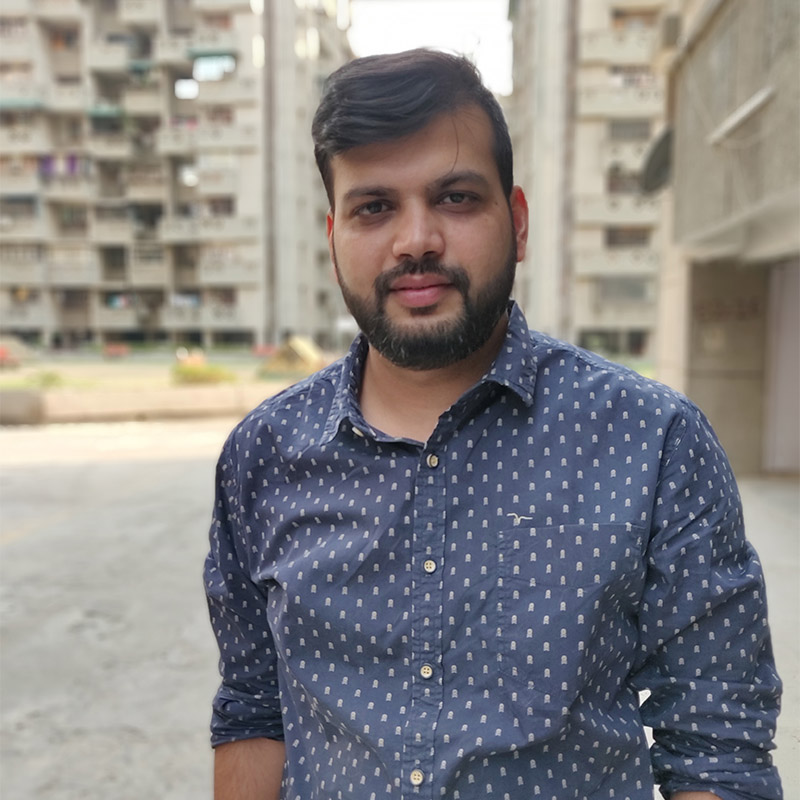 The front camera is the same 16 MP with an aperture of F/2.0. the only change is the addition of EIS. 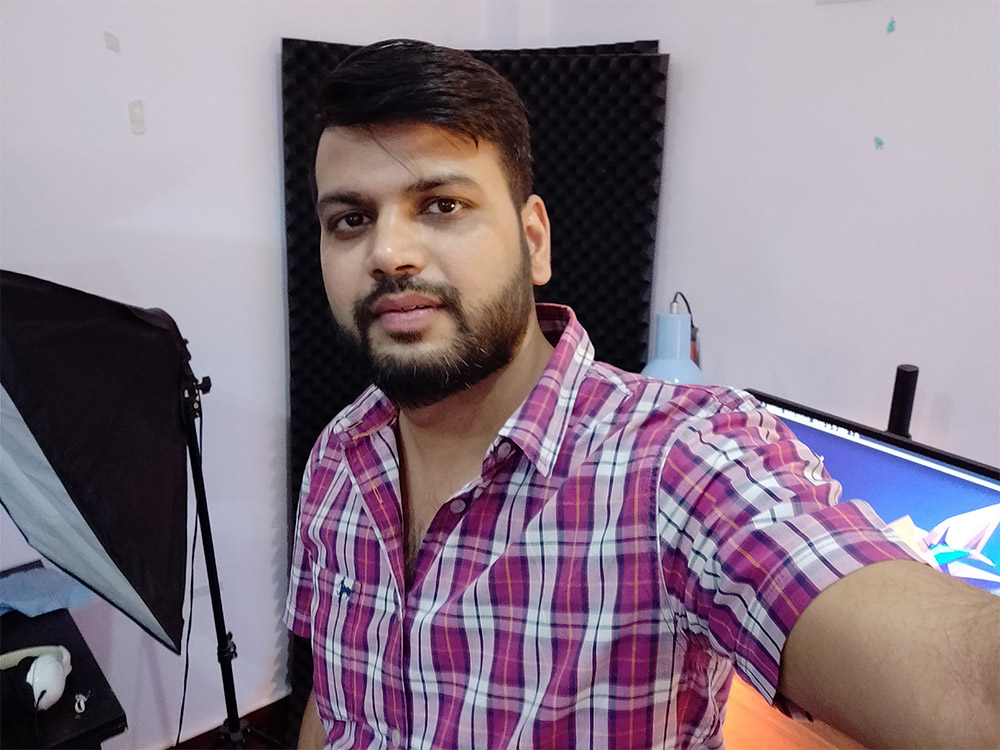 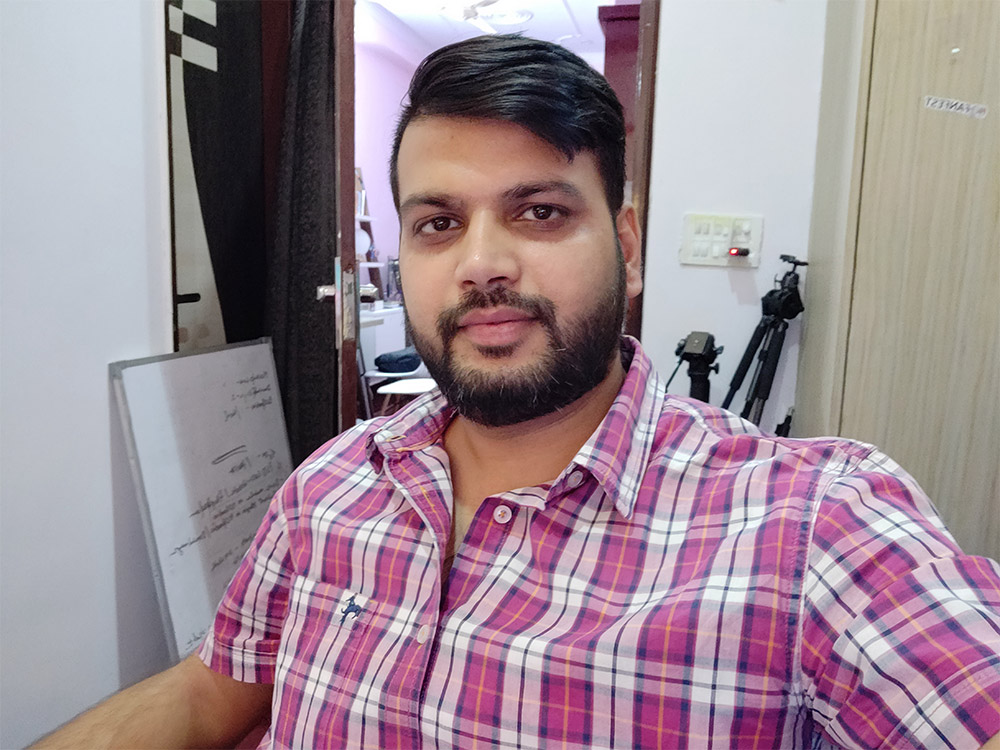 Overall i am happy with the front camera output during day and low light.The front camera was able to capture good details and the output was sharp with natural skin tones.And one more thing is the OnePlus is going to bring the portrait feature later on with an update very soon for the front camera.

You can shoot videos in 4k 60fps and with the OIS the output is nice.

For Video Sample watch the video

The colours are natural and The OIS does a decent job while capturing videos. 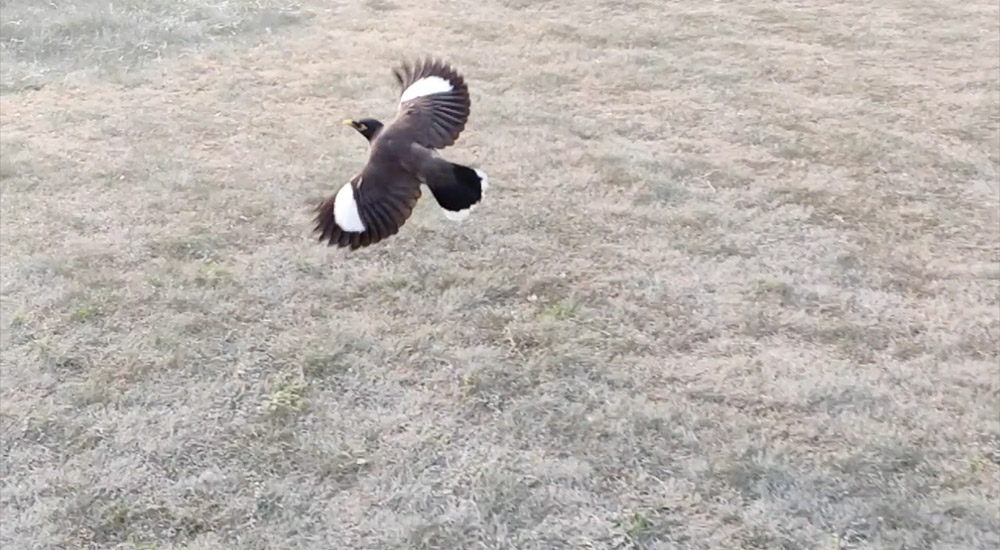 We also have the 480fps slow-motion and the output is decent and here the OnePlus 6 is missing the 960 fps slow mo which we have seen in the Samsung s9+ which is bit disappointing as the snapdragon 845 is well capable of handing the 960fps slow mo. 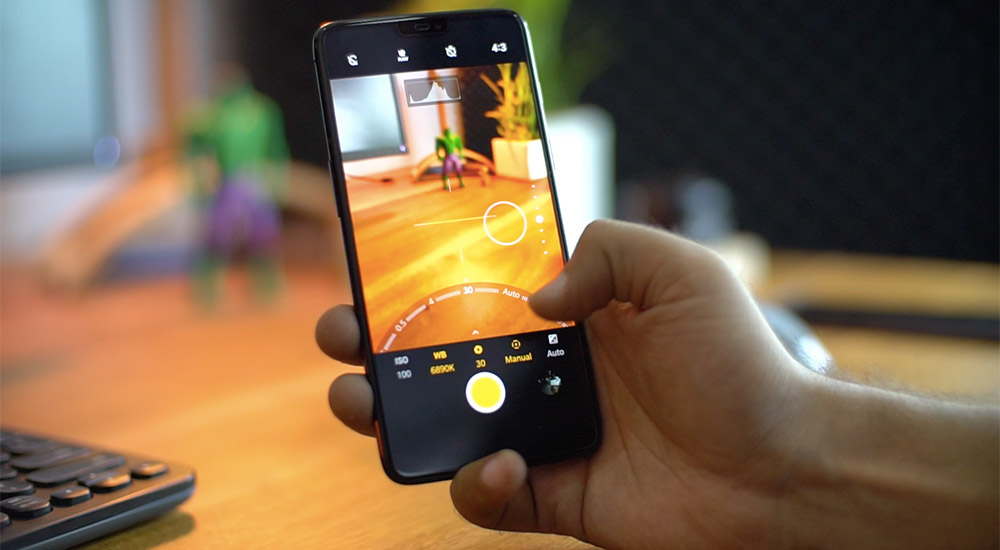 Overall the Camera UI is simple and easy to use  and in terms of  the performance of the camera its nothing extra ordinary.

Comparing the OnePlus 6 with the Last year flagship OnePlus 5T we get the Latest Snapdragon 845, Optical image stabilisation and the all the new design. We have the Glass back which looks premium and the beautiful looking screen with the notch and smaller chin we have now the 84% body to screen ratio which gives you slightly better user experience. 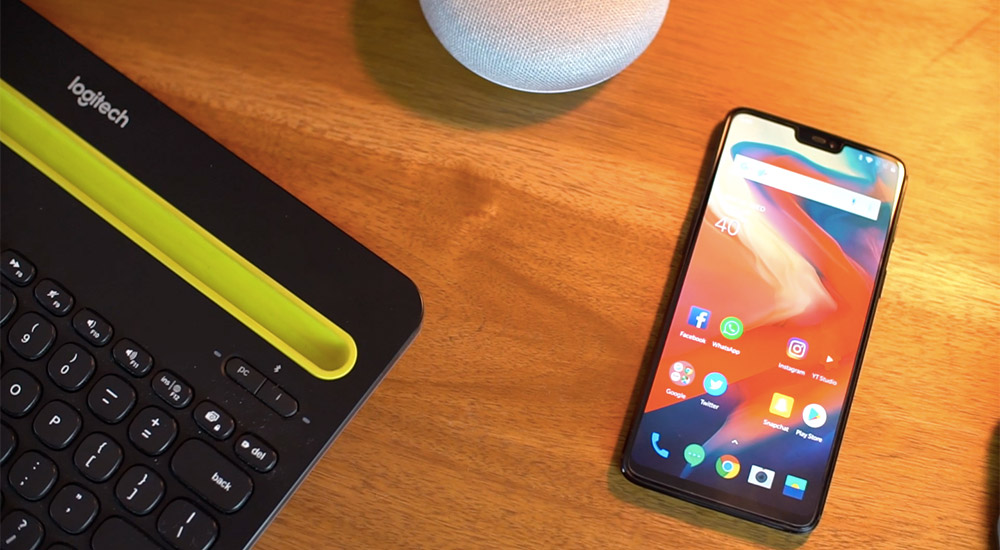 Overall OnePlus 6 a great phone with amazing performance that been said there are few things where OnePlus 6 doesn’t justify the Tagline NEVER settle. Things like lack of wireless charging, FHD Screen, No Rating for water proof and same size battery. And also The camera performance of the phone is not as expected from a flagship phone. And with the lack of all these features we think that OnePlus is cutting corners to minimise the cost which will Actually Make You Just Settle.

So thats it guys this was our Review of the OnePlus 6. We will do the comparison video of the one plus 6 with other flagship phones so stay tuned for that. So what do you think about this phone from OnePlus do you agree to the points we have discussed in the comment section below And Subscribe to our YouTube Channel Gadget Gig For Latest News, Reviews, Unboxing and Tips/Tricks.