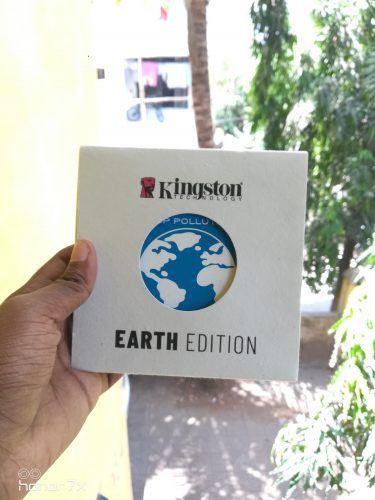 On the occasion of Earth Day, which is celebrated on 22nd April every year, Kingston Technology in collaboration with InDeed has raised an awareness campaign on the same occasion. Both companies have joined hands to create a social awareness campaign, which they are calling #EarthEditionDrives. This campaign imagines Earth as a USB Flash Drive, where Kingston aims to subtly draw attention towards the current situation of our planet.

Selected members of the tech industry were given a chance to take a first look at the flash drive before the initial launch itself. However, one question which kept on knocking on the doors was, What exactly happens when you plug in Earth to your PC/Laptop. Fortunately, we were one of the publications to be selected to have a look at this amazing campaign which Kingston has taken part in, in order to create a better world we live in. Well, as usual here at GadgetGig we will start off with our first impressions of the packaging and of course the device itself.

The packaging was pretty decent with a white rectangular box with Kingston branding on the top and Earth Edition written in bold at the bottom which is separated by an earth-shaped gap in between them. Upon opening up the box you are greeted with five coasters which spread awareness of the current state of the planet and what all you need to do in order to stop polluting the Earth. Also buried deep inside was the #EarthEdition flash drive in a space grey color with a tint of blue accent at the rear and the words Earth Edition 64GB engraved into it.

So me being me, got excited and wanted to give the drive a try. Immediately after plugging in the drive, a folder opens up with the title Earth Edition – Clean Up Before Time’s Up. The drive was filled to the brink with various types of pollution that we as humans spread into the world which in turn will affect us in the near future.

The main motive of Kingston and InDeed behind this campaign is to tell us that we sure can delete the files in the flash drive but can we delete the things we did which harmed the planet, no, so step up and stand against pollution. The flash drive contains around 1,000 files full of videos ranging from air pollution to soil pollution and many other ways we destroy our earth.

Mr. Vishal Parekh, Marketing Director, Kingston Technology India, says, “We are happy to have partnered with Posterscope for this social initiative on World Earth Day. With this high-octane awareness campaign revolving around our 64GB USB drive, we aim to educate our audiences about the ill effects of neglecting Earth and to motivate them to take appropriate actions. It’s not just about the shock factor; the true purpose of our Earth Edition drive is to educate and encourage everyone to do their bit; one way is by joining hands with NGOs through a microsite link in the junk videos.”

Mr. Haresh Nayak, Group MD, Posterscope – whose CSR arm Indeed is behind the project – adds, “You have no other choice. Earth Edition forces you to ‘clean up’ this ‘Earth’ in order to use it, subtly telling you to do the same in real life. This is the kind of campaign that really forces you to think about the planet. Everything, right from the messaging on the package, contents and the USB flash drive is crafted in a way that will make you take a good look in the mirror and consider your actions carefully.”

Gurbaksh Singh, Chief Creative Technologist, Dentsu Webchutney adds, “World Earth Day is our big chance to put the spotlight back on our planet. With some modding, we have turned the humble Flash Drive into a mouthpiece to save the planet that warns you at every step. In fact, even transferring the file results in a modified windows prompt that says There’s not enough space left on Earth. Clean Up Before Time’s Up which sums up not just the campaign but the very need to do this.”

By making use of technology in their #EarthEditionDrives campaign, Kingston Technology & InDeed are giving a reality check and making a strong point which every person should consciously remember and act upon. Fittingly, the campaign is called “Earth Edition” as it doesn’t get more ‘limited edition’ than our planet.

So think about it carefully the next time you pollute is the message Kingston hopes to drive with the campaign.