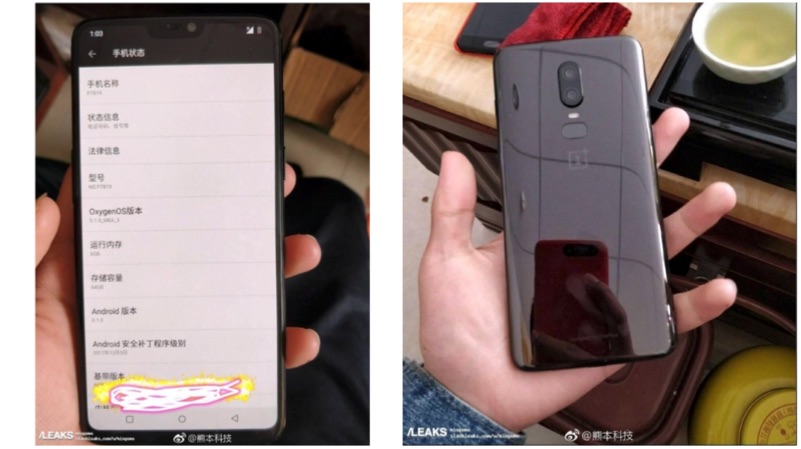 OnePlus upgrade their phones mid yearly and we saw the trend with OnePlus 3, 3T and the OnePlus 5 and 5T. The current flagship phone is due for an upgrade in June this year which are still weeks to go from now but this hasn’t stopped the rumours and leaks to come online. In the latest leak OnePlus 6 was spotted with edge-to-edge 18:9 display with the notch on the top similar to the iPhone X. The image also shows the vertical dual rear camera setup on the back of the phone and the Glass back clearly visible which might mean that it will support wireless charging.

The image surfaced online on the Chinese blog IT Home and it claimed to be the OnePlus 6. The display and the form factor of the phone is 2018 style with all screen front and minimal bezels on the sides.  But what is more surprising is the notch design from the iPhone X, which might be the place for the front camera and other sensors.

The report also suggested that the OnePlus 6 will have the model number P7819. The phone will have Snapdragon 845 SoC coupled with 6GB RAM and the 64GB inbuilt storage. The phone will come out of the box with Android Oreo 8.1. Its still way to early to rely on these leaks and it might be just one of the prototype of the OnePlus 6 and there is no doubt that we will see other renders and leaks of the upcoming flagship from OnePlus.

OnePlus CEO Pete Lau confirmed earlier in January that the company’s next flagship phone would be launched in the Q2 2018 which means the phone will be launched before the June End. He also said that mid year upgrade or the OnePlus 6T is not confirmed 100 percent.