The Chinese Smartphone manufacturer has created a lot of hype around the launch of its much-awaited Redmi Note 7 and the Note 7 Pro. However, the Note 7 Pro won’t be making its way to India as of now, although, the Redmi Note 7 is all set for its launch in India on February 28.

Xiaomi India has started a very interesting contest on its official Twitter handle. The company is asking its followers to spot the number of humans in the following image. The image portrays the number 7 with hidden messages inside the image itself which can reveal the highlights of the Redmi Note 7.

You know what to do! Find the answer in this #ǝɟᴉ7ƃnɥʇ 7 and share in comments to win goodies. #RedmiNote7

According to the followers and some pundits, the image gives out clues that the device launching in India might showcase the in-display fingerprint sensor which nowadays seems to be the trend after a successful launch of the Oppo K1 here in India, you can watch our exclusive review of the K1 here. Anyways, the company also has given us some minor clues about the whopping 48MP rear camera with Sony IMX586 sensor which will be available in the Indian Variant rather than the Samsung GM1 sensor which was used in the Chinese variants. 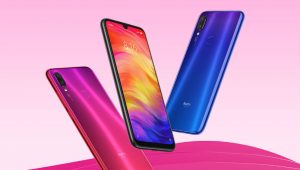 Since Xiaomi’s Product Manager, Wang Teng Thomas had posted on Weibo about more budget/mid-range devices receiving the in-display fingerprint sensor we can rest assure that the Note 7 will come with the same tech. Apart from few differences, the India variant of the Redmi Note 7 will be similar to the Note 7 Pro launched in China, the device will be powered by Qualcomm Snapdragon 675 SoC as per reports and it’ll pack in a decent sized 4,000mAh battery with Quick Charge 4. Also, the device will be available for sale in a 6GB+128GB storage option. The Redmi Note 7 Launch will be covered by GadgetGig here, so stay tuned to this space on February 28.