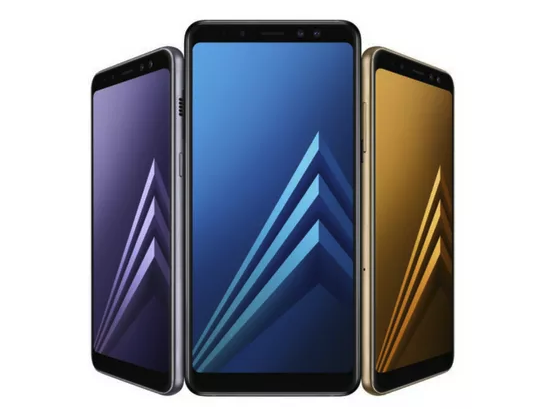 After all the rumours and leaks Samsung has finally Launched the Samsung Galaxy A8 and the A8+ Today (19th December Tuesday 2017).  The design looks some what similar to the Samsung Galaxy S8. Both Galaxy A8 and A8+ comes with the infinity display, IP68- certified which is water and dust resistance. There is also a dual selfie camera setup which looks really interesting. But as of now there is no info on pricing but both the models will go on sale from January 2018. 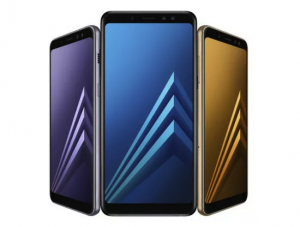 Specification and Features of the Samsung Galaxy A8 and A8+

As mentioned earlier both the phone are IP68 Certified and also come with the Samsung Pay. This is the First time that the A series will be supporting the Company’s Gear VR headset. In terms of look both the phones will be available in four colour options which are Black, Blue, Gold and Orchid Grey which will target mainly the young users.

Talking about the Specification. Both the phones will run on Android 7.1 Nougat out of the box. A8 will feature a 5.6 inch Full HD+ Screen which will have the resolution of (2220×1080 pixels) Super AMOLED display with 18.5:9 aspect ratio (the same as the Samsung Galaxy S8), where in the Galaxy A8+ has a 6-inch FHD+ Super AMOLED display. There is a curved glass protection on top of the Infinity Display panels, identical to the ones featured on the Galaxy S8 and Galaxy S8+. 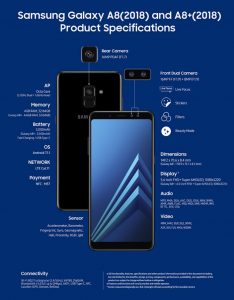 Samsung also introduced the Dual Selfie camera in both the phones targeting young users. In terms of details it is one of the camera is 16 megapixel fixed focus which has an aperture of f/1.9 camera and the second camera is 8 megapixel with f/1.9 aperture.  Due to this camera setup it will give the option to either blur the background to create a beautiful bokeh effect even after taking selfie. The rear camera on the phone is a 16 megapixel f/1.7 aperture lens. The rear camera supports digital image stabilisation in videos.

According to the statement of Samsung’s Vice President of Global Product Planning “we’re bringing our customers’ favourite features from our flagship smartphones, such as the Infinity Display and our first Dual Front Camera with Live Focus, to our Galaxy A series, which is already known for its premium design”

And Also Do Subscribe to Our YouTube Channel Gadget Gig For Latest News, Reviews, Unboxing and Tips/Tricks