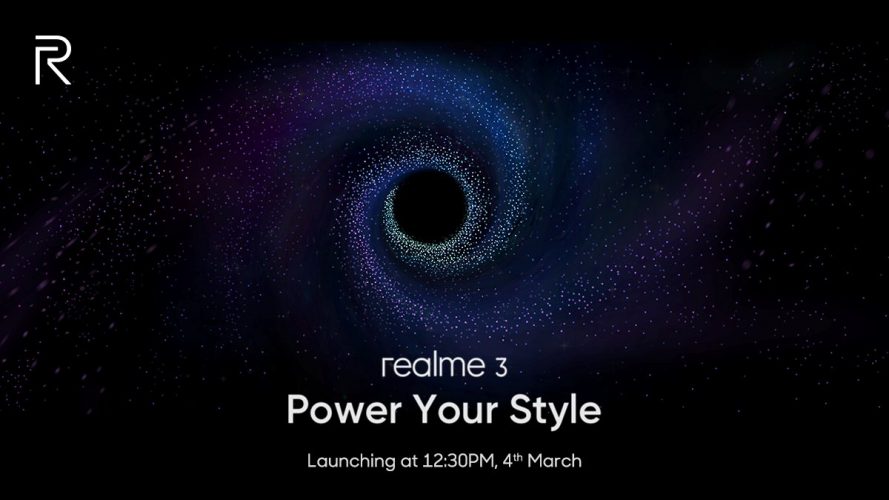 Realme has been teasing its upcoming Realme 3 on its social media for some while now and finally, the company has set the date for the launch which will be on March 4 at 12:30 PM. The Realme 3 launch will take place in New Delhi and the company has already started sending out media invites for the confirmation of the launch event.

Realme today, posted an image on its official Twitter handle regarding the launch date. The tweet was captioned, “Look at the sky, the stars are unwrapping something celestial. Witness the launch of #realme3 #PowerYourStyle live on 4th March on our official handles and be a part of the cosmic event”. The image shows us the exact launch date and time which is 12:30 pm IST on March 4th as we mentioned earlier.

Look at the sky, the stars are unwrapping something celestial. Witness the launch of #realme3 #PowerYourStyle live on 4th March on our official handles and be a part of the cosmic event. Find out more at https://t.co/HrgDJTZcxv pic.twitter.com/gG0l0ZnBm1

Rumors of the Realme 3 have been in line and going by them, the device will most probably be powered by the MediaTek Helio P70 SoC in India, as for the global variant the rumors suggest the Helio P70 chipset will be used. Also, a recent teaser put out by Realme Official shows us that the device will, in fact, come with a dual-rear camera setup and rear-mounted fingerprint sensor. The device is said to sport a 16:9 aspect ratio and since the device is a successor to the Realme 2, hopes of the Realme 3 are high.

According to Madhav Sheth, CEO of Realme, the Realme 3 was promised to be launched in India during the first quarter of 2019 and also, rumors suggest that the device will be housing in a 48-megapixel camera which will be competing against the likes of Honor View 20 and the yet to be launched Redmi Note 7. Stay tuned to GadgetGig for more news about the Realme 3.